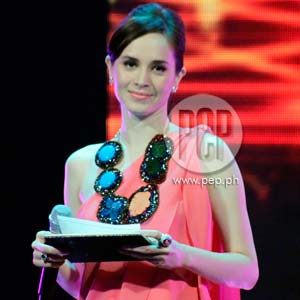 TV host Lucy Torres-Gomez is hoping that the Comelec will grant husband Richard Gomez clearance to pursue his bid for congress in Ormoc, Leyte, before the May 10 elections.

With less than a month to go before the May 10 elections, Richard Gomez's appeal to the Commission on Elections (Comelec) to reverse its disqualification ruling against him remains pending with no signs of an immediate resolution.

The actor-TV host was disqualified by the Comelec last February 17 because of residency issues. Gomez, according to the decision handed down by the Comelec, failed to establish residency in Ormoc, Leyte, where he is running for congressman.

A latest survey released, however, showed Gomez still enjoying a comfortable lead against his rival, Winnie Codilla. The survey was conducted by an independent research body composed of UP-trained researchers and statisticians.

Even before the survey figures were made public, Richard's wife, Lucy Torres-Gomez, told PEP (Philippine Entertainment Portal) about the good news during an interview at the launching of TV5's Sunday noontime interactive and musical variety show, P.O.5, last April 11.

"We're very busy. I just fly in to work and then I'll fly back to the province to help him campaign. But he's doing very well sa survey and his numbers are constantly surging," said Lucy.

The continuous support being given by the public keeps Richard going, added Lucy. Both are hoping and praying that their petition for a reversal of Comelec's decision would yield favorable results in the end.

"I think they're [Comelec] really weighting the merits of the case. We have naman a very strong case and I'm very positive that it will not take too much for them to see that we've submitted enough evidence to prove Richard's claims."

WORKING ON A SUNDAY. Lucy was still recovering from opening-day jitters when PEP caught up with her at the studio's waiting area. But more than anxiety about doing a live show, the soft-spoken host expressed joy with P.O.5's potential, in spite of tough competition from rival networks.

"Siyempre nakakakaba because you quite don't know how things would unfold. But on most things naman pag you're on TV, I think there has to be a healthy mix of excitement and kaba.

"The most important thing is for us not to lose that sense of fun. Even when the pressure is there, masaya pa rin dapat. I'm happy that despite the newness of everything, nangangapa pa kaming lahat and I only hope that that translated to the viewers and that they felt that."

"He's excited that TV5 has grown this much. Si Richard naman has always been supportive... He's always the one who wishes me well, encourages me, and inspires me," said Lucy.