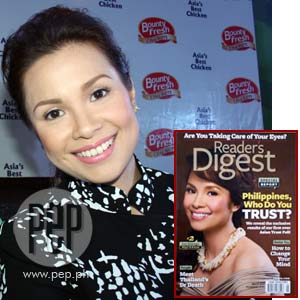 Filipinos consider Lea Salonga as the second most trustworthy personality in a poll sponsored by Reader's Digest Asia. For this reason, she landed on the cover of the magazine's March 2010 issue (inset). Topping the poll was movie icon and Philippine Red Cross governor Rosa Rosal.

Lea Salonga was chosen to grace the cover of the March 2010 issue of Reader's Digest Asia when she ranked second in the most trusted poll conducted by the popular magazine.

The world-renowned theater actress-singer was next only to Rosa Rosal, former actress and Philippine Red Cross governor.

How did she feel when she learned that Filipinos consider her to be one of the most trustworthy personalities in the country?

"Well, I was a little shocked, actually, when I got word that Reader's Digest ran a survey and that I ended up second most trusted. I was like, 'Really? Why?' (laughs) I honestly had no idea what I had done.

"It's certainly an honor to have been considered because this is not exactly an award. It involves a survey. Ordinary people were asked for the survey. So I found out that's what people think so it was a little overwhelming to receive that. It's one thing to be recognized for your work and you kind of accept it a little more quickly, because I really did put in the work. But when it's something that you don't know exactly what you did, it's kind of like 'Whoa!'" she said.

Lea became known internationally for her role as Kim in the musical Miss Saigon. She started portraying the iconic role at the West End, London when she was just 17 years old. She went to Broadway to portray Kim and earned accolades from major award-giving bodies such as the Olivier Awards and Tony Awards. She also made her mark in the musical Les Misérables where she was first cast as Eponine and years later, as Fantine.

She was also able to penetrate Hollywood when she was tapped to be the singing voice of Disney's Princess Jasmine in Aladdin and the title character in Mulan.

"VOTE ON MAY 10." Since the survey shows that a lot of Filipinos trust her, PEP (Philippine Entertainment Portal) asked Lea to name an area where she would want to influence Filipinos.

"I'd also like tell them to be a good kid to your parents, parents be good to your children, respect your elders, study hard, work hard. Find what it is you really, really have a passion for and keep your faith in God. Follow your heart, follow your dreams, and everything will kind of follow because it kinda happened to me.

"It's a tough [question to answer] because I'd like to be able to say something to people without sounding cliché. It's something I really have to think about before I give a full-blown answer," said Lea who was launched last April 12 as the new endorser of Bounty Fresh Chicken at the Peninsula Hotel in Makati City.

ON HER DAUGHTER NICOLE. A member of the press was curious if Lea thinks her daughter Nicole Beverly will be a performer like her someday. Lea's daughter with husband Robert Chien will turn four years old this May.

"She seems to have an inclination for what I do and I don't know if that's innate or she's watching me a lot," she said. "She's turning four next month so my husband and I are starting to think of activities for her, like arts, dance or music, or all these things that I did when I was younger.

"We never really know so right now it's easy for me to say that she has the inclination for the arts and for what I do. But if you ask me two years from now, I'll say, 'No, she's gonna be something else.' I really don't know. If she does decide to do what she wants to do, I just hope she doesn't have any added pressure because she's my daughter."