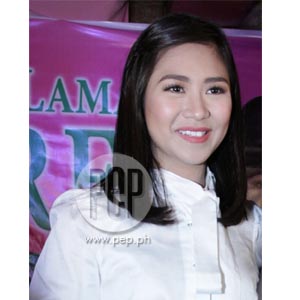 Earlier today, April 26, a photo of Sarah Geronimo, the celebrity endorser of Nacionalista Party's vice-presidential candidate Loren Legarda, doing the "L" or "Laban" sign has started to circulate on the Internet. Has she switched from Nacionalista Party to Liberal Party? Viva Artist Agency denies this assumption.

Is Sarah Geronimo a turncoat from Nacionalista Party to Liberal Party?

Some questioned the photo's authenticity, others believe that it was taken years back.

When PEP (Philippine Entertainment Portal) checked the other comments on the said photo, which first came out in the social networking site Twitter, some speculated that it might have been taken during the funeral of the late President Corazon "Cory" Aquino.

There were also comments hinting that this photo was taken during the 2007 senatorial elections.

At that time, Sarah was endorsing Senator Edgardo Angara, who was then seeking his fourth term under the Laban ng Demokratikong Pilipino, which could be the reason Sarah was photographed doing the "L" sign.