Four Filipino filmmakers listed among "most exceptional" directors in the world 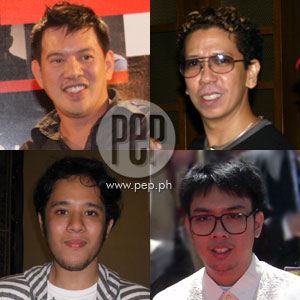 (From upper left, clockwise) Brillante Mendoza, Auraeus Solito, Raya Martin, and Pepe Diokno are among the 100 directors profiled in the book Take 100. They are counted among the "most exceptional and emerging film directors" of the world.

Four Filipino filmmakers are among the 100 directors profiled in the book Take 100, which is published by the London-based Phaidon Press.

Brillante Mendoza, Auraeus Solito, Raya Martin, and Pepe Diokno will be featured in the said book that is subtitled The Future of Film: 100 New Directors. It aims to present 100 of the "most exceptional and emerging film directors" in the world as chosen by a panel of internationally prominent film festival programmers.

The ten curators who deliberated on the Take 100 book are also behind some of the world's top film festivals. These include Marco Muller of the Venice Film Fest, Cameron Bailey of Toronto International Film Festival, Trevor Groth of Sundance Film Fest, Kim Dong-Ho of Pusan (held in South Korea), and Frederic Maire of Locarno (held in Switzerland).

Each filmmaker included in the book will have a short biography. In addition, one film of Brillante Mendoza, Auraeus Solito, Raya Martin, and Pepe Diokno will be given an in-depth analysis by the curator-festival programmer.

The filmmakers included in Take 100 were selected from countries as diverse as China, Israel, Mexico, India, Romania and Algeria.

MOST EXCEPTIONAL DIRECTORS. PEP (Philippine Entertainment Portal) had the chance to interview two of the filmmakers—Auraeus Solito and Pepe Diokno—regarding this distinction.

Diokno, the youngest among the Filipino filmmakers included in the list, says that he would let his films, rather than his age, do the talking. He was 22 years old when his film Engkwentro won the top prize in the Orizzonti (New Horizons) category of the 66th Venice Film Fest. His directorial debut, which tackles extra-judicial killings in the Philippines, will be the film in focus for the said book.

He shared his reaction about this development via e-mail: "I feel good that there are four Filipinos on the list! This means that more people will find it viable to make films here, which means more jobs for the film industry. Recognition alone means nothing. It becomes extra special when it gives life to Philippine cinema."

Auraeus Solito thanks serendipity for working its magic at this time in his life.

"I was in Amsterdam for a six-month screenwriting fellowship when I got the news. I was burnt out then. Before I left for Amsterdam, my neighborhood's community—the slums around my house where Maximo Oliveros was filmed—got demolished. A place of inspiration and my youth, gone in a day... So when the news came, it was perfect timing, like a pat in a back to make me move on and be inspired once again."

Ang Pagdadalaga ni Maximo Oliveros will be tackled in the Take 100 book. It tells the story of a prepubescent boy who falls in love with a policeman, placing him at odds with his family members who are engaged in illegal activities. Maximo has been recognized internationally through awards received from the Independent Spirit Awards, Berlinale, Las Palmas Film Festival, and the Montreal World Film Festival.

Brillante Mendoza has received a string of recognitions from international film festivals, the most notable of which is the Best Director award that he earned during the 62nd Cannes Film Festival.

Independencia and Now Showing, bothby Raya Martin, made history when these were included in Cannes' Un Certain Regard section and Director's Fortnight section, respectively. Raya and Adolf Alix Jr. also co-directed Manila, a film that was shown in Cannes out of competition.

FUTURE OF FILM. The filmmakers visualized the future of film several years or decades from now.

According to Direk Auraeus through an email message, digital technology will be the wave of the future for cinema. "Film is the youngest amongst the arts. Film is technology and art. There are many possibilities in technology but there is only truth in one's art. As technology progresses, filmmakers will go deep within themselves and rediscover their true indigenous identity to understand what is man's better nature."

The 22-year-old filmmaker believes that the way people consume movies may change in the future. "I think TV has become a very promising medium—people like Steven Spielberg and Peter Jackson are constantly looking to it—but people, I included, cannot do without films."

ON PHILIPPINE CINEMA. Direk Auraeus explains that foreign programmers are excited about works from the Philippines because Filipinos are so unpredictable.

"We don't have a certain look, nor follow one style of filmmaking," he points out. "Filipino filmmakers offer diversity. Unlike other countries where one can tell where the film comes from [i.e. Korea, Hollywood, Bollywood], the Philippines' diverse cultures of indigenous identities, mixed history of Spanish and American colonialism and modern political chaos will work for the Filipino filmmaker for he has many realities to portray in his art."

Direk Pepe is looking forward to the day when the division between independent films and mainstream movies will be erased.