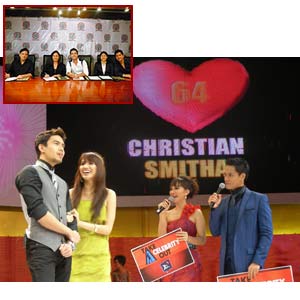 (Main photo) Christian Bautista graces the live episode of Take Celebrity Out, which will be aired this week. (Inset) The actor-singer signed an exclusive contract deal with ABS-CBN last night, April 26.

In North Jakarta, Indonesia, at a studio called The Dome, Christian Bautista graced the live episode of Take Celebrity Out—a high-rating show in the country's leading network Indosiar—as one of the three celebrity male contestants.

As Christian's name was announced, he began singing from behind the screen, and had all the ladies in the studio screaming and cheering.

The dating game, which is a franchise of the FremantleMedia, tasked the Filipino star to search for "love" among the 30 famous single ladies—including the host of the show, Yuanita, who joined because of her huge crush on Christian.

The episode, which will be aired this week, ended with the audience picking Christian and actress Smitha, who both took home five million rupiah in cash.

LOYAL KAPAMILYA. Meanwhile, his latest single "Tetaplah Dihatiku," the Bahasa version of "Please Be Careful With My Heart," is said to be the number one song in Indonesia this month of April.

He is set to promote the Mandarin Chinese version with Kewei in Singapore next month.

But despite his successes in the other Asian countries, leaving the country doesn't figure in his immediate plans.

The 28-year-old singer-actor began his career seven years ago in the Kapamilya network's reality singing contest search Star in a Million.