Angel Locsin: "I can act sexy but I will never claim that I'm sexy." 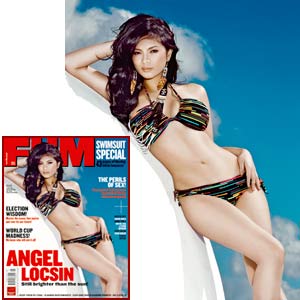 Angel Locsin is FHM-Philippines' cover babe for the month of May. The Kapamilya actress' last cover appearance in the men's magazine was in October 2005.

Angel Locsin's last FHM-Philippines cover appearance took place five years ago. The morena actress has been a constant feature in the leading men's magazine, especially during its annual Sexiest Women in the Philippines deliberations by fans and loyal readers.

Angel appeared on the cover three times—October 2003, March 2005, and October 2005—and won the Sexiest Women list in 2004. Since then she has figured prominently in the ranking despite the emergence of sexy newcomers every year.

Moreover, the 25-year-old actress was included in the 25 Sexiest Women of the Decade roster last month to celebrate the magazine's 10th year anniversary.

That said, it's only fitting that Angel makes a stellar comeback on FHM for the month of May.

While her previous appearances were nothing short of eye candy for the male readers, her return clearly captures a woman comfortable in her own skin. Angel didn't mind wearing two-piece bikinis for the photo shoot to announce her newfound confidence.

Angel also candidly talked about her "addiction" to online gaming, communicating with fans via social networking tools, and of course the status of her relationship with vocal admirer Efren Peñaflorida and ex-flame Luis Manzano.

Learn more about Angel Locsin in the May issue of FHM-Philippines, now available in newsstands, bookstores, and supermarkets nationwide.