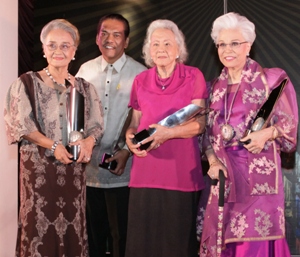 Direk Brillante was unable to attend the awards night since he is currently in Belgium but his daughter Angelica accepted the silver trophy in his behalf. She read his acceptance speech, which explained that the event in Belgium had been planned five months ago.

Sam Milby presented the awards to this year's Best Actresses, Rustica Carpio and Anita Linda, who both starred in Direk Brillante's Lola.

Lou Veloso was teary-eyed as he accepted theBest Actor trophy for the Cinemalaya entry Colorum. He revealed that he almost did not accept the project since it involved a long road trip that took 16 days. He dedicated his trophy to his "leading man" Alfred Vargas.

Piolo Pascual had the honor of announcing this year's Best Picture, which went to Kinatay (also directed by Direk Brillante). Coco Martin and Maria Isabel Lopez joined the cast and crew members who went up the stage to receive the trophy.

Marissa Sue Prado of Himpapawid received the Best Supporting Actress trophy from Eugene Domingo. Before she announced the real winner, Uge (Eugene's nickname) jokingly announced that she won in the said category for Foster Child. In the 31st edition of the Gawad Urian, Uge lost the Best Supporting Actress trophy to Angela Ruiz of the film Tirador.

LIFETIME ACHIEVEMENT AWARDEE. The Natatanging Gawad Urian Lifetime Achievement Award went to Armida Siguion-Reyna, an actress, producer, and industry leader who is described by Manunuri member Nicanor Tiongson as someone who "took on a host of major problems in the film industry to make good films and for that, Filipinos will forever be grateful."

When Tita Midz (as Armida is affectionately called) went up the stage to give her acceptance speech, she told the audience: "Hindi ko inakala na mararating ko ang karangalan na ito at estado na ito.

Gelli de Belen and Butch Francisco served as the hosts of the event.

THE WINNERS. Here are the winners of the 33rd Gawad Urian: