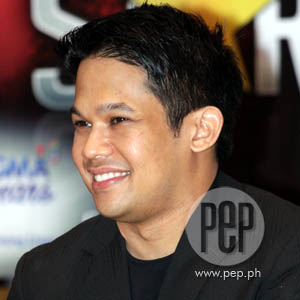 "Kahit ako I'm as confused as maybe anyone who's interested to know whether I will transfer. Pero hindi ko pa din alam kung anong mangayayari. I'm intrigued by it also," says radio and television personality Mo Twister concerning the status of his contract with GMA-7.

In a conversation with PEP (Philippine Entertainment Portal) last night, April 29, the radio and television personality admitted that his status as a GMA-7 talent remains vague until May 3.

"Right now, on Sunday, I'm still with Showbiz Central. I might not be happy with the direction maybe things are going for me here but that's something that they [management] brought up. Sila naman ang nagsabi sa akin and hindi naman ako nagtatanong. I just do my job," Mo said.

Mo was pertaining to top management's supposed candid assessment of his career and future with the Kapuso network in a recent meeting.

"I have an interest in exploring what I want to do with my career. I love Showbiz Central, I love the staff, I love the people I work with. But I also have to be realistic in thinking kung may future ba ako dito," said Mo.

He added, "I have meetings with some of the managers and they told me, 'Your outlook here in this channel isn't very good compared to, say, what other people might want you to do for them.' So, siyempre, when you heard those words from your station, it's kind of disheartening.

"I'm not asking for a raise, I never asked for a raise, I've never asked for extra shows. Wala akong manager, hindi naman ako nagpu-push and wala naman akong agenda when I met with them. I just want to know what should I do with my career. I talked to these people like Wilma [Galvante] and she said, 'You know your outlook here in GMA isn't very good.' So, siyempre, I should be interested in exploring other places and that's how far it went as for now."

WORKING WITH CRISTY. Mo's option to transfer is highly possible considering the fact that there's an offer for him to join a rival showbiz talk show.

Incidentally, the show that is reportedly being offered to Mo is being co-hosted by his known industry nemesis: veteran gossip columnist Cristy Fermin.

The feud between the two started in 2006 after Mo allegedly called Cristy an "idiot" in his radio program. Cristy reportedly retaliated by confronting and "badmouthing" Mo while inside his dressing room during a TV guesting.

Mo welcomes the opportunity to work with Cristy despite questions on whether the two can co-exist in one show.

"Professionally," he continued, Cristy and I hated each other and then it carried on personally. We'll see. I mean if ever we work together, I'm sure naman she's been in this business long enough to know that trabaho lang naman ito."

MERGING OF FORCES. The press conference held last night was to announce the strengthening of GMA-7's showbiz talk shows Startalk and Showbiz Central.

"I think what we are doing is like saying that there's a unity on weekends when it comes to entertainment talk shows. We're not competing but we're actually complementing each other. So ang mangyayari is every week, one host from Showbiz Central will be on Startalk on Saturday and vice versa. I think it's gonna be fun," said Mo optimistically.

Mo attributed the innovations to the growing battle in the showbiz talk-show genre.

"The competition of not just the channels, especially now that there's a new major player involved... Like the competition doesn't just stop on the stations like it always is."

He acknowledges the threat imposed by the rival programs as something real yet good to keep the industry thriving for the benefit of the viewing public.

"Everybody feels there's a threat," confided Mo. "It doesn't matter kung you're in the softdrinks war or if you're in the telecommunications war. Business is a war. It's not a violent one but it is a competitive war, so kailangan talaga kung may commercial ang isang produkto, kailangan meron din 'yong isa.

"It's the same with television. I think kung may bagong programa ang isang istasyon, kailangang mag-step-up. You have to think of something new. You have to be very competitive."