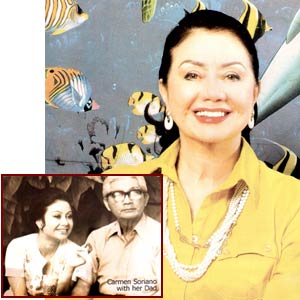 In sending this photo, Carmen Soriano wrote, "I am not too computer savvy, but learned to at least e-mail." She also added a brief note, "I am also fortunate to be in good health, and found inner peace in my faith. Although that part is very private with me..."

Singer Carmen Soriano could not find singing engagements in Manila in the 1970s after she was rumored to have had a child by former strongman Ferdinand Marcos and that his wife Imelda Marcos had thrown acid at her face to disfigure her.

In a face-to-face interview last Thursday night, May 20, the mother of actor Lloyd Samartino was still ravishing at 69.

"I don't know how that rumor started," Carmen Soriano said, "but I lost work because of it. I had nothing to do with the gentleman [Marcos]. Maybe, he admired me. I never found out."

She said she had met Marcos only once when she sang in an event where he and his wife Imelda were guests. She sang a duet with him, the Ilocano song "Ti ayat ti maysa nga ubing (For love of a child)."

"That was the only time our paths crossed," she recalled.

But it led to the wild rumor. Ms. Soriano had to flee to the U.S. to save her career.

"It was very difficult for me here," she said. "Some people believed the rumor to be true, others didn't. But I couldn't find work here and I didn't want to explain so I decided to leave for the U.S. In fairness to Imelda, she never did anything to me. No acid, no threats to my life, nothing. I left because I just wanted to get away."

Abroad, Ms. Soriano sang in night spots and stayed there long enough to be an immigrant. But she returned after some time and was face-to-face with Imelda when she sang for her in Au Bon Vivant, a restaurant owned by Nora Daza.

"After singing, I went to her and greeted her," Ms. Soriano recalled. "I even kissed her on the cheek. I gave her all the respect she deserved as a First Lady."

Like Imelda Marcos, Carmen Soriano was a former Miss Manila. She earned the title in 1957 and won a trip to Hong Kong. She was only 17.

FINDING HER STYLE. While in Hong Kong, Ms. Soriano toured the clubs there and was asked to sing in one during one of these visits.

"I only knew one song, 'No Other Love,' and I thought I couldn't sing, but a musician, Celso Carillo convinced me to stay," Ms. Soriano said. "He trained me to sing, and I stayed and sang at the Winner House in Hong kong for a few months."

Back in Manila, Ms. Soriano presented herself to sing at the Manila Hotel. She wound up singing for several years at the Bulakeña Restaurant on Roxas Boulevard. This is where she developed her style as a flirtatious chanteuse with the fluid body moves.

"But whatever flirtations I had was only for the stage," Ms. Soriano remarked. "I'm really very shy."

She said she's also scared of men, and had turned this fear into a running joke in her shows.

"Don't touch my hand," she told a man in the audience during a recent show. "Otherwise, you have to marry me."

CARMEN UP CLOSE. Ms. Soriano would only own up to two relationships—with Italian-Australian Lloyd Samartino Sr. and Dr. Robert Dabao—evading questions about her rumored dalliances with the late actors Eddie Rodriguez and Amado Cortez.

She married Samartino Sr. whom she met in Australia when she had a show there. She was only 20, he was 19. The marriage ended barely a year later even after she found out that she was pregnant with Lloyd.

"He was too young to have a family," she said of Samartino Sr. "He wanted freedom. It was very difficult for him."

A few decades later, Ms. Soriano married Dr. Robert Dabao, brother of the actor Ricky Davao. But a year into their marriage, Dr. Dabao was diagnosed with cancer and eventually passed away.

Carmen Soriano is the daughter of Fernando Soriano and Luz Concepcion, a working-class couple. The fourth of six siblings and the eldest daughter, she had to quit school at age 12 to take care of the family while her parents worked.

"That was our culture then," she said. "The oldest daughter had to be the homemaker if the mother was at work. But I am lucky that my mother was an English teacher, and I learned to speak English fluently from her."

She also recalled that her mother would drag her to movie studios for auditions, but she was never "discovered" until her photo was sent to organizers of the Miss Philippines pageant where she won the Miss Manila title.

"Even then, I was very shy," she said. "I wanted to just be a private person."

"I DON'T LOOK BACK." Until her return to the stage a year ago, Ms. Soriano remained a private person. Showbiz beckoned again last year when she was asked to do a special show with Carmen Pateña and Pilita Corrales.

"I don't date," she said. "I live alone, without an entourage. I even drive myself. But even when I was not doing shows, I kept myself busy. For example, if something needed fixing in my house, I would fix it myself. I also learned how to sew. In fact, I make all my gowns now."

She had also gained weight, which she lost after some prodding by her son Lloyd, a healthy diet and help from a cosmetic surgeon.

"I fixed myself not to look young, but to look good," Ms. Soriano said, admitting to a tummy tuck.

But she has done nothing to her face, which now shows lines on her forehead and laugh lines by her eyes. She also has a hint of a dowager's hump on her back.

And Ms. Soriano does look good, on and off stage. She can still sway to the rhythm effortlessly even though she now has to strain her voice to reach the high notes of some songs.

"You're entitled to a few mistakes at my age," she laughed. "People are more forgiving. Even if my voice cracks or I forget some lyrics, they still appreciate me."

Songs like her trademark "Eres Tu" remain part of her repertoire, as well as an OPM medley and an ABBA medley.

"I choose to sing songs that are melodious and pleasant to the ear," she said, apparently shunning the R&B sound of Beyonce and her kind.

As a performer, Ms. Soriano describes herself as a "persona."

"I have to be packaged," she said. "I'm not like other singers who have a beautiful voice. I am not a great beauty. I have flaws. When I'm on stage, it's the total persona that you see."

As a performer, Ms. Soriano still has a lot of mileage left in her. She can still pack a crowd and keep the audience excited with her songs and free-flowing spiels about her life, her loves, her weight and her age.

But she refuses to look back, not even at the number of record albums she has done, the movies she has made or the TV shows she had—For Men Only, Carmen on Camera, and Carmen in Color. In fact, there is no record of Carmen Soriano, the singer on Wikipedia or on IMDb.

"I don't keep memorabilia," she said. "I don't look back. The future I'm looking at might be worse than my past.

"I did some crazy things, lost money on some bad investments, but I have overcome most pitfalls. I treasure most my health and my faith in God. I am happy that I am performing again. I'm happy to be alive."