TFC reveals its world tour lineup for second half of 2010 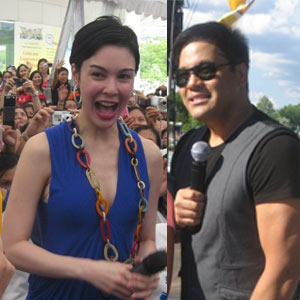 Filipinos from all corners of the world will once again be high on Kapamilyaexcitement as The Filipino Channel (TFC) sets another amazing line-up of events around the world from June to December. Bringing Kapamilyastars closer to Pinoys in key cities in North America, Europe, Middle East, and Asia-Pacific, ABS-CBN Global continues more than 15 years of tradition of providing only the best homegrown talent to Filipinos worldwide.

ABS-CBN Global Head of Events Mickey Muñoz says, "Every year, we are overjoyed by the continued support and increasing enthusiasm of our kababayansabroad. In return, we make sure that our events get bigger and better, bringing them even closer to home. Get ready mga Kapamilya because this year will be another year to remember!"

Global Pinoys definitely have a lot to be excited about in 2010. For starters, TFC will be bringing the spectacular One Kapamilya Go! event to Toronto and Calgary in Canada; California, U.S.A.; and Nagoya in Japan.

From June 2010 onward, TFC stars, songs, fun and games will once again add flavor to Philippine Independence Day celebrations all over the world.

In North America, TFC partnered with Philippine Independence Day Council, Inc. (PIDCI) to co-present the much awaited annual event in the heart of Manhattan on June 6.


"It is always a pleasure on the part of PIDCI that TFC provides the Filipino community in New York and neighboring states with well-known entertainers, showcasing the best of Filipino talent. We hope to move forward with this relationship, HAWAK KAMAY (with joined hands)," said PIDCI President Dr. Bernardo dela Merced.


Aside from the festival in New York, TFC will also bring Kapamilya stars to the following events: Fiesta Mo Sa Florida on July 24; the 17th Pistahan Festival and Parade sa Yerba Buena, San Francisco on August 14 and 15; and the Philippine Fiesta Sa America in New Jersey on August 14 and 15.

In Europe, TFC will bring distinctly Filipino melody and comedy to the Barrio Fiesta in the U.K. on July 17 and 18; in Milan on June 6; in Ireland on June 12; in Amsterdam on June 12; and in Rome on June 13.

TFC has a lot more in store for Kapamilyas this 2010, including special performances in the Middle East and live concerts in Australia.

Some of the Kapamilya stars who will bring "home" closer to Pinoys this 2010 are Kim Chiu and Gerald Anderson, also known to fans as Kimerald, as well as Pinoy Big Brother Double Up tandem Melai Cantiveros and Jason Francisco, also known as Melason. Wowowee host Pokwang will also join the festivities, as well as I'll Be There star Gabby Concepcion.

ONE KAPAMILYA GO. It will be recalled that in September 2009, more than 10,000 people flocked to TFC's One Kapamilya Go! event at the Great America in Santa Clara. Commemorating TFC's 15th anniversary, the attendees were treated to screenings of the blockbuster film And I Love You So, auditions for Pinoy Big Brother and Pinoy Dream Academy, and meet-and-greet sessions with celebrities.


By the time the show started, the Redwood Amphitheatre was filled to the brim with audiences who enjoyed the performances of Billy Crawford, Vhong Navarro, and Charice Pempengco. They also participated in fun activities like the Dating Game with Luis Manzano, the Betty La Fea look-alike contest with Bea Alonzo and the Pera o Bayong styled Cash/Bukash.

This year, spectators can expect only the best from TFC as it plans to outshine last year's 15th anniversary celebrations.

They brought musicality and humor to Europe where crowds were enthralled to see tandems like the Concert King Martin Nievera with comedian Chokoleit in Italy and Asian Pop Idol Christian Bautista with Tambayan 101.9 wacky disk jockey Pretty Tizsa in Spain.

Mister Shades Randy Santiago heated up the cold weather in Scotland and Ireland with his signature songs and timeless flare. Richard Poon went cross-continental as he performed with glamorous actress-model Gretchen Barretto and comedians Ador and Ate Gay in Singapore and crooned before Filipino communities in Japan and in the U.A.E. Talented comedians Pooh, Marissa Sanchez and Rhada also stormed Australia with their humorous wit in Poohmarhada.

Every year, TFC is committed to go beyond boundaries in order to bring true Pinoy talent and entertainment to a wider global audience, connecting and nurturing relationships with Filipinos worldwide.