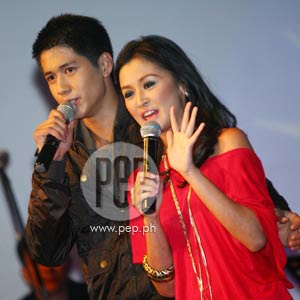 Kris Bernal and Aljur Abrenica are on the final days of being a love team with their primetime fantasy drama coming to a close. After this, the two will explore different paths and will be teamed up with different partners. On Showbiz Central yesterday, May 30, Kris was interviewed by John Lapus to get some answers on existing juciy issues.

Actress Kris Bernal's love team with Aljur Abrenica is coming to a close with The Last Prince airing its final episodes. The two have projects waiting for them but on separate paths. Kris will team up with model Daniel Matsunaga for an episode of Lovebug and Aljur will be with Rhian Ramos in a primetime series.

Yesterday, May 30, on Showbiz Central, Kris was strapped to a lie-detector machine to face master showbiz interrogator John "Sweet" Lapus and answer some past issues about her and Aljur, plus recent ones about her new project with Daniel.

DANIEL MATSUNAGA. That said, it was time for the second question. Rumor has it that ever since Brazilian-Japanese model Daniel Matsunaga came into the picture and joined the cast of The Last Prince, a love triangle issue burst forth with connecting issues like Aljur getting jealous and Daniel breaking up with his girlfriend because of her. Now, is it true that Kris is into Daniel more than Aljur?

"No," the petite actress calmly answered.

But the machine said otherwise: "Lie!"

Well, according to Sweet's informer, Kris and Daniel go out even when there's no taping?

THE NEW KRIS. The final question had to do with Kris's new look. Of course, fans of Kris have noticed that her appearance improved from her early days in StarStruck to her current status. Question is, did Kris undergo some enhancement for her face?