Raymond Lauchengco and his shift from pop-rock stardom to balladeer 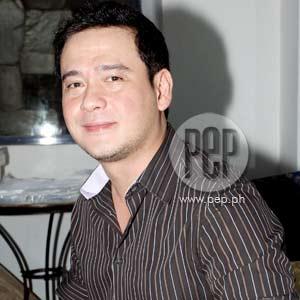 Back in the '80s, Raymond Lauchengco was one of the most in-demand singers and actors. He could have done and achieved more in mainstream showbiz, but he didn't want to compete. Looking back, he's just thankful that at one point in his life, he was at the top of his game. No regrets either, even if these days his star is not as bright as it used to be.

Singer Raymond Lauchengco could have been a pop star in the 1980s but he chose to be an enduring artist instead.

What that means for Lauchengco to endure these days is to sing to about seven people and compete with the tingling noises of slot machines. For four more weeks in June, Lauchengco would be singing every Wednesday night at the slot machine area of the casino of the Heritage Hotel.

"We have to do what we have to do," Lauchengco told PEP (Philippine Entertainment Portal) on Wednesday night, June 2, after his first night at the Heritage. "I've performed in ballrooms, palaces, cockpits, town plazas, and once, in an airplane where it's not allowed."

Lauchengco has also performed in the Araneta Coliseum, which he describes as a glorified cockpit.

"If I didn't enjoy what I do, I wouldn't compete with the slot machines," he said.

POP CELEBRITY. Superstardom was once within his reach after the iconic youth-oriented movie Bagets, directed by Maryo J. delos Reyes, became a blockbuster in 1984. Lauchengco played one of the lead roles alongside Aga Muhlach, JC Bonnin, and Herbert Bautista.

"I tried to live up to being a pop superstar," he said. "I really tried. I tried, not knowing any better. I tried to be Martin Nievera and Gary Valenciano...Keno and Gino Padilla. I didn't know then that I would be perfectly happy just being Lauchengco."

Nievera and Valenciano were at the height of their careers when Lauchengco's star was rising. Keno and Padilla led a pack of young pop-rock singers that included Lauchengco, tagged as the Pepsi Generation, a major music marketing campaign of the soft-drink company in 1986.

"That was a different ball game altogether," Lauchengco said, referring to the frenetic pace of his booming career and the fan adulation.

At that time, Lauchengco was a high-profile singer, actor and television presence, co-hosting shows like Maricel Live with Maricel Soriano and Herbert Bautista, Studio Whispers with Janice de Belen, and GMA Supershow with German Moreno.

He was managed by an equally high-profile manager, theater and stage director Roxanne Lapus. In one conversation with Lapus and this writer back then, the manager confided that Lauchengco was confused about his success.

Lauchengco wanted it; he just didn't want to compete.

"Yes, I could have done more then," he admitted. "But it could have driven me crazy. I'm just thankful that all that [success, popularity] happened."

ROOTS IN THEATER. These days, Lauchengco takes "great pride in doing a good job" as a balladeer. At last count, he has done eight albums, the latest, released in 2007 under Viva Records, is called Full Circle. Here he embraces the big-band sound, and swings as he sings some of the hits of the 1980s.

The year 2005, however, was his comeback, sort of, as a major pop artist when Vicor Records re-issued some of his previous hit songs in the album, Lauchengco. He had been out of mainstream pop for a decade.

Lauchengco has hit his mid-40s, gained a few pounds and shows some gray hair. He married Mia Rocha in 2004, and had a baby. Now they have two-Natalie, 3, and David, six-weeks old. He still looks cherubic, but not in the "bagets" way.

"You have to grow up sometime," he had said during the presscon to launch Lauchengco, the album.

He was saying that again on Wednesday night (June 2) at the Heritage Hotel.

"I am now 45-years-old," he said. "I sing mainly ballads now. I can't be like what I was back in the 80s. I grew up. I don't have that pop persona anymore. I'm now more suited for shows in music bars, cocktail lounges...small, intimate venues. I am not as visible now as I was in the 80s. And I disappeared from the scene because I went back to my roots in theater."

He was Louis in The King and I, Charlie Brown in You're a Good Man, Charlie Brown, Friedrich in The Sound of Music, Tobias in Sweeney Todd, Joe Cable in South Pacific, Matt in The Fantastiks-all staged by the Repertory Philippines-and Romeo in Romeo and Juliet, produced by the University of the Philippines Presidential Commission for Culture and the Arts, Daniel in Once on this Island, a special production for the audience of the Princess of Brunei. He also reprised the roles of Raoul in Phantom of the Opera, of Chris in Miss Saigon, and of Joe in Sunset Boulevard, also for a showing of Broadway excerpts for the Princess of Brunei.

For his role of Rama in SK Productions Rama Sita, Lauchengco was nominated for Best Actor in the 2000 Aliw Awards, which named Rama Sita as Best Musicale for the same year.

It was in theater that he was discovered for mainstream entertainment by Sharon Cuneta, according to one urban legend, and brought to the attention of record and movie mogul Vic del Rosario, whose Viva Movies and Viva Records produced most of his movies and records.

HERE AND NOW. Lauchengco also turned to photography for seven years, and found out that "I was actually good at it." He also tried business, "but I was bad at it." Now, he also directs corporate events and feels perfect for it.

He does not nurture any regrets from the past.

"Regrets are all pointless," he mused. "What is more meaningful to me is the here and now. What I have now is tomorrow, which is more important. But the most important is my family, my kids and wife."

He would not have done anything differently.

"When I think of the pop celebrity that I used to be, it seems like a thousand years ago," he said. "I'm now looking forward to the next thousand years of my life."