NEWBIE: Singer-actor Jaco Benin wants to make his own mark 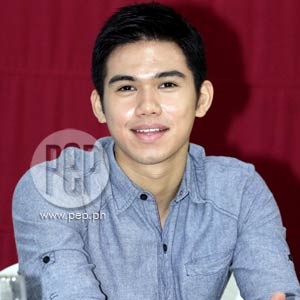 "My dad never pressures me. Sabi niya 'Sarili mo 'yan and music mo 'yan and you're there because of yourself and hindi dahil anak kita,'" showbiz newcomer Jaco Benin said about his father, Side A bassist and songwriter Joey Benin.

19-year-old Jose Carlo Benin knows the pressure of being the son of a highly-respected musician.

"But he's very supportive and hindi siya nakikialam. He's very confident na kaya ko and he gives me good comments that could help me," said Jaco (Jose Carlo's showbiz nickname) about his father in an interview with PEP (Philippine Entertainment Portal) last July 21 at the Rembrandt Hotel in Quezon City.

The father Jaco was talking about is no less that Side A bassist, arranger and songwriter Joey Benin. Some of the songs penned by Joey include "I Believe in Dreams," "By Your Side," "All this Time," "Only You (There Will Never Be Another)," and "Forevermore," among others.

Jaco—who is part of Eugene Domingo's upcoming comedy series with TV5 titled, Inday Wanda—is currently pursuing both acting and recording. He admitted that the first plan when he first joined show business was for him to be just a singer.

But the opportunity to act in front of the camera presented itself and Jaco instantly grabbed the chance. He was cast in ABS-CBN's Gimik 2010 and is also currently seen in the Sunday musical variety show, ASAP XV.

The showbiz newcomer never denied the fact that they were initially hoping to bank on his father's name as a ticket to gain a headstart in the highly competitive industry.

"My dad said 'Huwag mong sabihin 'yon,'" he recalled. Kasi he wants me to make a name of my own. Ayaw niyang maging shadow lang ako."

Jaco is currently in the middle of recording his album under PolyEast Records. He described his brand of music as "alternative acoustic."

As a musician who is hoping to be heard by a larger audience, the pressure on being the son of an industry veteran hit maker is always there.

"There are advantages and disadvantages. Siyempre may connections kasi he has a name na, pero disadvantage din at the same time kasi people would expect too much from me. Doon dumadating 'yong pressure especially when I perform and sing kasi baka ikumpara nila ako sa Side A. Kahit naman ako... sobrang hanga ako sa Side A kasi sobrang galing talaga nila. But my dad always tells me to give lang my best sa mga ginagawa ko."

His choice for an onscreen leading lady is another singer who happens to be a fine actress as well.

"I want to work with Sarah Geronimo," revealed Jaco. "I find her very charming and parang ang sarap niyang katrabaho."