Eugene Domingo is optimistic about her "zero" lovelife 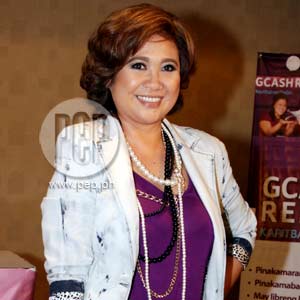 Loveless but happy: Comedienne and Mamarazzi lead star Eugene Domingo believes that the right man for her will come in God's perfect time.

Eugene's movie career has also been on an upswing as proven by the good showing of Working Girls and Here Comes The Bride at the tills. On August 25, Mamarazzi, Regal Entertainment's 50th anniversary offering, will hit the theaters nationwide.

With all the good things going on in her professional life, fans may be wondering how Uge's personal life fares, particularly in the romance department.

Not that the comedienne—who is touted by some as the next Comedy Queen after Ai-Ai de las Alas—is feeling desperate about not having a partner.

In fact, she makes fun of the situation as if it were a comedy sequence.

THAT THING CALLED "MAGIC". Eugene portrays an overprotective single mother in Mamarazzi. Her character's triplets are the result of an arranged one-night affair with a sperm donor portrayed by Diether Ocampo.

In reality, however, Uge doesn't relish the thought of raising a child as a single mom.

The amiable comedienne feels comfortable about having a husband even without kids.

At 39, Uge remains optimistic about her chance to someday settle down with the right person. She dismisses the notion that men are perhaps intimidated by her celebrity status. She says that most guys probably see her as merely "one of the boys" and not as the girlfriend type.

But it still boils down to that thing called "magic." Yes, even a Eugene Domingo believes in hearing beautiful music and seeing a flock of chirping birds while in the presence of that special someone.