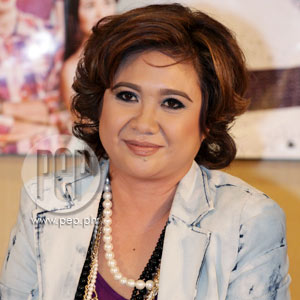 In a conversation with PEP (Philippine Entertainment Portal) at the press conference of Regal Entertainment's 50th anniversary offering, Mamarazzi, last August 3 at the Imperial Palace Suites in Quezon City, Eugene fondly recalled spending her 39th birthday in Hong Kong along with some of her closest friends.

The surprise intimate gathering was a gift from actor-director and good friend Eric Quizon. Eric was in Hong Kong at the time together with his father, Comedy King Dolphy.

Eugene's birthday is on July 23 while Dolphy is on July 25—making the party a double celebration of sorts for the two popular comics.

Dolphy has been very generous in complimenting Eugene as a comedian, citing the former stage actress's impeccable comedic timing as one of her best assets in making people laugh.

Having the legendary comedian on board was enough for Eugene to feel both humbled and flattered: "Hindi ko inaasahan na makakasama ko 'yong King of Comedy at nabigyan ako ng chance na makapagpapirma nung Dolphy book."

The fun holiday gave Eugene a few days of rest before diving back to her hectic schedule. Aside from Mamarazzi (which will open in nationwide theaters on August 25), Eugene will also be seen in GMA-7's newest sitcom JejeMom and TV5's September offering, Inday Wanda.

"Oo naman," she smiled, when asked if she was able to recharge her batteries while overseas. "Masayang-masaya naman ako sa naging bakasyon ko at handa na ulit ako para lumaban."