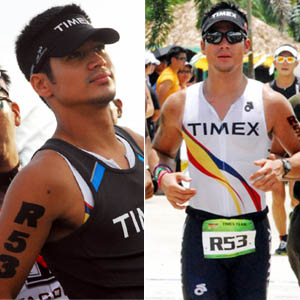 "I never thought I'd be doing sports and pushing myself to the limits. As an actor acting is my comfort zone. Doing my training is so different from what I'm used to. I motivate myself for personal reasons. I challenge myself to finish that course. I try not to think about being pressured because I'm a celebrity," says Piolo Pascual, who competed in Ironman Triathlon 70.3 Philippines last August 22 in Camarines Sur.

"I'm not the kind of person who runs away from something. I don't think that way. Just face it, whatever it is, and then CONQUER it." — Piolo Pascual, actor and runner

This is exactly what Piolo Pascual did when he, along with swimmer Jenny Ty and cyclist Laurence Medenilla, together known as the Timex Team, competed against the world's best triathletes in the much-celebrated Ironman Triathlon 70.3 Philippines held last August 22, 2010 in Camarines Sur.

Ever since its inception, the Ironman 70.3 series has become the fastest growing triathlon series in the world. Currently, there are 31 events around the world that qualify athletes for the Ironman World Championship 70.3 in Clearwater, Florida every November. Ironman 70.3 races consist of a 1.2 mile swim, a 56-mile bike and a 13.1 mile run.

Through the rush and hardcore action, the first-time participants gave nothing less than their best performances and clocked in at 5 hours, 52 minutes, 59 seconds, total team time which ranked them 9th in the Mixed Relay Category and 28th overall, among all relay teams.

Despite his busy work schedule and being constantly confronted by public scrutiny, speculation and sensationalism, Piolo was able to find time to get into running on top of other sports he dedicates his time to. In fact, he even trained under renowned running coach Rio dela Cruz who with him led the very first Timex Run last year. Piolo started running during the 2009 Timex Run.

Timex originally wanted Piolo to run only 3k but he trained and upgraded to 10k. He finished his first 10k in less than 47 minutes. From there on, long time runners had been setting a 10k finish goal or "sub-Piolo" or less than 47 minutes. "Sub-piolo" has become a famous term in the running community.

The successful running event was followed by a string of other marathons such as ABS-CBN Foundation's Run for the Pasig River and The Green Miles Run for an Eco-Smart Lifestyle, among others.

"I love living an active lifestyle," said Piolo. "After working out in the gym, I run, then I swim, if there's time I bike, then I eat, and if I still have time I play badminton. Even in my down time, I'm always training. It doesn't just take two weeks for me to prepare, it takes a long time. Every day if I see an hour window, I put training into that. We can always find excuses not to but if you really want it, you'll find time," he said.

"I never thought I'd be doing sports and pushing myself to the limits. As an actor acting is my comfort zone. Doing my training is so different from what I'm used to. I motivate myself for personal reasons. I challenge myself to finish that course. I try not to think about being pressured because I'm a celebrity," he said.

True enough, Piolo and his relay team were bonded for no other reason but the burning passion outdo themselves and go beyond boundaries.

Laurence, who did the cycling leg of the race, said: "We have a business venture on airsoft guns. I actually met PJ through the ABS-CBN soap Lobo. Since practical shooters appear as police military agents on TV shows and movies."

This practical shooting team, composed of very close friends call themselves Tacops or Tactical Options. Swayed by Piolo to get into running, they then ventured into other sports which eventually led to triathlon.

Piolo added, "They are friends, whom I met from friends of friends. Jen is from La Salle, and she's doing the swimming, and Laurence is doing the biking. I met them from the people I train with, so I know that they will make a good team."

Piolo, who has always been a proud part of the Timex family who has always cheered and supported him through his career and all the way to the race track, has only one advice to those who may already be runners and want to conquer a marathon or like him, a triathlon.

"Never underestimate yourself. Always challenge yourself and that is the only time you will know just how much strength you have inside of you. You will be surprised at yourself, and in the end, you will know yourself better," he said.

Coming from a man who said he'll do a full 42-km marathon soon and vowing to do his first solo triathlon at the third international Ironman competition, we better believe so.