Direk Robert Quebral gets serious about keeping everybody happy 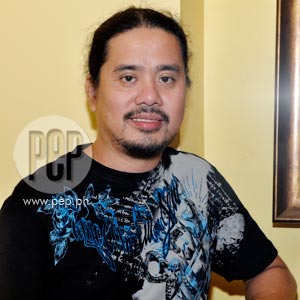 Direk Robert Quebral is the man behind TV5's Wow Mali! and Everybody Hapi. When asked about his network, he says: "Hindi ganoon ka-corporate, ka-ruthless, they are actually very caring compared to others."

Director Robert Quebral walks into the quaint restaurant for this PEP (Philippine Entertainment Portal) interview, dressed in his trademark jeans, sneaks, and t-shirt—hair bound up in his signature ponytail.

His quiet demeanor doesn't hide his strong gaze—piercing eyes that seem to hold so much power—as he tells us how he directs the TV5 sitcom Everybody Hapi and gives us a glimpse of his long experience in filmmaking.

WACKY FAMILY. Everybody Hapi revolves around Nova Villa's character, her son played by John Estrada, and his sidekick Long Mejia, both of whose mishaps make viewers laugh till it hurts. Alex Gonzaga plays John's daughter by a former wife who died. Roxanne Guinoo used to play John's wife until she left the show.

"Now the show focuses on the friendship of John and Long, yung kanilang misadventures," Direk Quebral says. The extended family set-up now all live in the same house, so that everybody can be happy.

"It was sort of a reformat what we did, parang in the sitcom, they moved out of their neighborhood to start life again in a new place with the whole family."

Direk explains that he let the new place become part of the storyline. "In the latest season, it was all about moving to a new place, actually an old condominium na may character din. From an ordinary duplex in Kamias tapos ngayon nasa Malate sila... may mga neighbors din ulit sila like before whose storylines get included as well."

Conflict is stirred up by the characters played by mother-daughter tandem Carmi Martin and Carla Humphries—a social-climbing pair who want to break into showbiz and "antagonize the Everybody Hapi clan, eto na yung pinaglalaruan na source of conflict in the comedy."

A new feature in the comedy is the hallway of the condominium where several scenes take place. Direk wants to keep it real by deviating from the basic set-up (living room, kitchen, dining area).

Direk Quebral adds elements reminiscent of Palibhasa Lalake to spice up the comedy. "I'm trying to achieve what Palibhasa Lalake did, yung parang improvisation. We saw a lot of efforts nila Long to provide this, we just allowed the script to have improvisation parts—the hallmark of PL. Of course, John was part of PL, Long of Kool Ka Lang, na successful din by Channel 7, with Joey Marquez."

At the same time, Direk tackles the family angle through the relationships of John, his daughter Alex, and mom Nova Villa. The storylines or situations don't have boundaries.

"Kahit ano maisip namin," says Direk. They had one season that rode on the fantaserye craze, a fantastic series, a season where everything was totally outrageous and fantastic—aliens, superheroes, and it worked.

"Ang maganda sa Wow Mali! ngayon is marami kaming natutunan from the past so nare-refine namin ang techniques, ways, and executions of gags or practical jokes."

Direk's other TV5 projects are still in the pipeline, like House or Not, a game show "inspired by Japanese game show tradition. It's not violent, really fun, and we're giving away a house."

For the meantime, he's not accepting anything big, like commercials and TVCs. That's where he came from with his background in music directing. But for now, as a director and cinematographer, he wants to focus on his TV shows.

THE DIRECTOR'S ROOTS. Robert Quebral took up a business course totally unrelated to his present craft. That strong background helps him today—investing in the right products (people) and projects for best returns. Right after college, he joined the Mowelfund Film Institute, where he got his training. Back in the early '90s, "they were very active with young filmmakers like me. I was very lucky to be part of several workshops." He ended up becoming an employee of Mowelfund, even facilitating future workshops of the group.

Quebral's roots as a director are really in independent filmmaking, working with the likes of Raymond Red, Young Caranan, Neil Daza. He started shooting short films, "before CCP was very active in supporting filmmakers also, parang 'yan ang pinaka-Oscars natin. Every year we would join this really small competition, and luckily I took home a few awards."

He crossed over to mainstream filmmaking because "hindi lang puwede panay personal na trabaho, so most of the graduates of Mowelfund, ang pinakamalaking crossover is to advertising." He worked with an ad agency where directed several commercials for TV over the years. After his advertising stint, he went onboard with MTV Philippines, other channels like Solar TV and RPN, with another stopover in ABS-CBN's cable network.

He did QTV cooking shows too, sub-directing for other directors. "Ang pinaka-highlight talaga, if you were to pick one sa career ko, it would be music videos."

That's where he stayed the longest, starting with Parokya ni Edgar that went on for several video projects. True Faith and other mainstream artists like Jaya and Ogie Alcasid became his bread and butter too—13 videos or so.

When he moved on from music video directing and came back to TV, he found out that "marami pala akong nakatrabaho before in other projects, na dati, assistants lang sila, 'tapos ngayon, sa [TV5], sila na yung mga bosses, mga executive producers and they remembered me."

Through these contacts, he became part of new or old shows. One of them was Benette Enriquez, a good friend he worked with for Philippines Next Top Model. Afterwards he was given projects like Wow Mali!, Lokomoko, and eventually Everybody Hapi, the first major TV show he directed. He was also tapped to direct a part of TV5's Five Star Specials (featuring JC de Vera), the second episode in the series about a street fighter.

In the future, he'd like to direct young actors who have the potential to become big stars through his film projects. "I'm more that, yung gusto ko, I'm helping to build up stars. Gusto ko yung mga up and coming talaga and I love working with them. I'd be frank about that, kasi maraming horror stories about the big stars... as for me, I've worked with a few and they're okay. Pero, di mo na sila mamold, as a director, you want something na may active part ka sa growth ng star mo."

As a total filmmaker, he wants to be in control of the big picture. The tendency "is for me to direct every aspect." He understands though that he has to collaborate with others and approach filmmaking in different ways.

If he could get his hands on directing a star, it would be Dennis Trillo, although that's a remote possibility at this time. When asked why, he shares, "Dennis reminds me of Tony Leung, the perfect actor who when working with a director, is able to bring out the best in him and vice versa. He is the perfect actor because he is very malleable, parang chameleon, and comes up with so many variations of a character."

Being more of the production guy, not management, Direk Quebral finds a lot of outstanding qualities with TV5's management. "They are very into it, hindi sila detached, they are very involved, in a more friendly manner."

Direk Quebral feels there is more of an investment by management "sa personal level and always with considerations. They always give people a second chance, to continue to redeem themselves, kunwari hindi successful in the past and these people are given chances."

Direk appreciates this because he knows that showbiz is very hard and people make mistakes. He's glad that the company he works with understands that as well, seeking improvement all the more.

What's for sure is, Direk Quebral will keep busy making everybody happy.