NEWBIE: From cyberspace to showbiz, meet the real Ellen Adarna 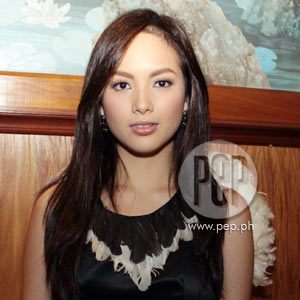 New Kapuso talent Ellen Adarna says she was really affected by the fake accounts and "doctored" photos of herself that sprouted on the Internet. At first she tried defending herself. It was like adding fuel to the fire. In the end, she decided to ignore the whole thing. "Of course I still feel bad, pero wala na akong magawa, e."

While other "Internet Sensations" became popular for their singing and dancing talents, newcomer Ellen Adarna attained celebrity status because of her looks.

She later found out it was not a good idea to share too much... especially on the Internet.

"I uploaded my photos and suddenly, there were pictures of me everywhere! Some were fake—because my face was pasted on bodies of other people," Ellen told PEP (Philippine Entertainment Portal) after the presscon proper of Asar Talo, Lahat Panalo, last September 9 at Annabel's Restaurant on Tomas Morato, Quezon City.

"People would use my picture or would fake my identity. I was interviewed by Jessica Soho [on the February 16, 2008 episode of Kapuso Mo, Jessica Soho], because they were doing a feature on identity theft," the 22-year-old half-Spanish, half-Chinese Cebuana continued.

"They were fake... Exagge! At first, talagang pinapatulan ko na talaga, 'cause I was trying to defend myself. But I noticed the more na pinatulan ko siya, the more lumalala. So, now I just don't mind it na lang. Of course I still feel bad about it. Pero wala na akong magawa, e."

There are over 20 fake "Ellen Adarna" accounts on Facebook.

In a way, the notoriety from her stolen photos, fake accounts, her magazine photo shoots and interviews had paved the way for a showbiz career. She started appearing in Bubble Gang this year and has signed an exclusive contract with GMA-7. Ellen, together with new Kapuso talents Gwen Zamora and Andi Manzano, who were introduced last month to the press.

"I used to work for my dad," shared the 5'1" Cebuana who was a model before joining showbiz. "I just moved to Manila from Cebu last February to pursue this career.

"Before, I wasn't ready for it [showbiz]. Actually, bago ko lang na-realize na this is what I want. So, parang sige, eto. Kinarir ko na siya. Before, I never took it seriously."

She also admitted that she was sort of a "pasaway" when she was younger.

"I didn't listen to my parents. I did things because I wanted to," Ellen confessed. Among the things her parents disapproved of was her sexy photo shoot for UNO. "My parents never allowed me to do it. I was young... naging pasaway ako. But I don't regret it. It was a fun experience."

How does she find showbiz so far?

"It's a different experience, a different life compared to my previous job. So far, I'm having fun. Kaya nga lang I can't go out na that much. I mean, I used to go out before."

Ellen said she'd rather spend her energy working than clubbing till the wee hours.

"'Cause now, I'm always busy. And I can't get puyat. At least naman I'm doing something productive. I'm earning from it."

"The Bida is the contestant. Di ba kasi, it's him against the world? I'm the Bida's Angel. Parang yung guardian angel niya. I'm the one who interviews the family members, his friends. We support the contestant by giving him words of encouragement: 'Okay lang 'yan, kaya mo 'yan. 'Wag kang magpa-affect sa mga nang-aasar sa iyo.'"

She will debut in the new Kapuso game show on September 18, Monday, before Eat Bulaga!.

Ellen also told PEP that she landed a role in the new Enteng Kabisote movie due for the December filmfest. "I play Ibong Adarna in that movie [Enteng Kabisote]... Then there's Party Pilipinas... I might also do a teleserye."

Ellen revealed she broke up with her boyfriend two weeks ago. "Not because of showbiz, but because we had differences."

Asked how long she expects to be in showbiz, the Internet celeb turned showbiz newbie said she plans to stay long enough to make her mark in the industry.