Sam Milby wants to have more time for motocross 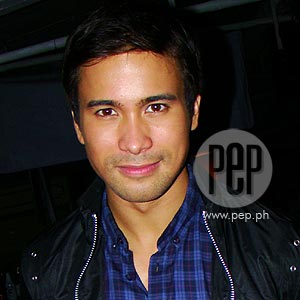 Sam Milby admits he's not really much of a runner. He may not break records, but he will try to achieve his personal best at the Blue Water Day Spa's Fun Run on October 17 at the SM Mall of Asia grounds.

"It's my first time to be in a fun run. I'm joining the 5k [category]," said the hunk actor during the launch of the event at Encore, The Fort in Taguig City recently.

To prepare for the race, Sam trains at home. "I practice my running form. I have a treadmill sa bahay," he told PEP (Philippine Entertainmnent Portal).

If there's one sport he would like to spend more time on, it's motocross.

The first time the Fil-Am singer-actor tried this extreme sport was when he was six years old. He was 16 when he joined his first official competition in the States.

Sam said he was influenced by his father who was really passionate about motocross.

When he moved to the Philippines, Sam never lost his passion for the sport.

Although he has less time to indulge in his hobbies, the former Pinoy Big Brother housemate makes sure he gets on his bike once in a while.

Unknown to many, the 26-year-old celebrity had already won two titles in the Philippine National Supercross Series Round last July 19. He ranked first in the beginner's section and third in the novice category.

Sam said he would like to devote more time on the sport, perhaps enter some races. "Gusto ko magkarera pero alam mo naman 'yong trabaho ko, hindi ako pwedeng maging crazy or anything. Kapag wala akong teleserye or some [other show] siguro, I will push myself."

Sam knows the importance of sports to keep mind and body in top condition.

The event will have 3k, 5k, and 10k races, as well as other activities on sports, fitness and fashion. To join, visit R.O.X. (Bonifacio High Street), Timex (Mall of Asia and Glorietta), Columbia (Greenbelt 5), Res Toe Run (Gateway), and Urban Luxe (Alabang).