Robin-Mariel wedding is a "gimmick," says majority of the PEPsters 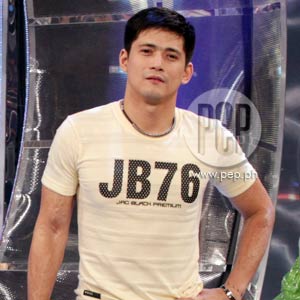 Robin Padilla's wedding with Mariel Rodriguez is this year's most controversial (and confusing) event in showbiz. Agree?

It's confirmed: Robin Padilla and Mariel Rodriguez are married!

But instead of congratulations and best wishes, the recent milestone in the lives of the showbiz couple elicited an uproar.

It was the Ibaloi ceremony—which reportedly took place last September 13, and was officiated by a mambunong or native priest named Jimmy Ong—that launched various reactions.

The loloand lolaof the 26-year-old host were shocked to learn about the change in civil status of their apo on television.

The Muslims reportedly couldn't fathom why their brother would participate in a ceremony where a pig was butchered and the blood was smeared on his face.

Robin's ex-wife Liezl Sicangco affirmed this via a text message to Gorgy Rulla of Startalk. "Bawal 'yon," she said.

Despite the testimony of the native priest, Robin told PEP (Philippine Entertainment Portal), "Walang kasal na naganap." He insinuated that whatever happened in Baguio City was for his upcoming show with Mariel.

The conflicting statements had left the public bewildered at first, then eventually, irked.

PEP's poll results registered only 392 votes, an indication that netizens are so turned off by the din, they don't want to be involved.

What could have been a beautiful moment for the newly-weds turned into a farce—53.57% of the PEPsters thought it was just a "gimmick."

Other respondents—46.43%—hoped that the Ibaloi wedding was for real. But now that the couple revealed their real wedding took place in India last August 19, even the believers have probably had a change of heart.

So what's the PULSE when it comes to these two? Most PEPsters would say they have no time for gimmickry.