Piolo Pascual on being an "icon": "There's a certain responsibility that comes with it." 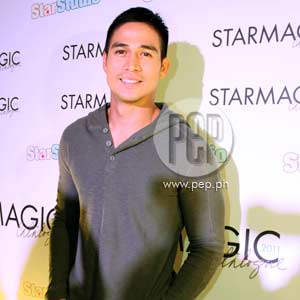 "For me, it's nice to be called as such because you are reminded na, you know, you are not alone in a fight. You know, you're actually fighting with a team, for a team," said Piolo Pascual on being called an "icon."

Piolo Pascual says being called an "icon" is not all about its grand status— it's a responsibility for one to be a role model.

In the past issues of the annual Star Magic Catalogue, Piolo was always placed on the first few pages of the publication, which means he's one of the prime artists of ABS-CBN's talent arm Star Magic.

Although Piolo humbly accepts the honor, he says, "More than the prestige, it's a responsibility to be a good example to all the up and coming [talents] and to the rest of the family."

He says further, "Of course, it's a compliment. You know, it's not something na masasabi mo na... I don't want to brag about it but sometimes it's just a happy feeling. Hindi na kailangan explain 'yong feeling in words because who am I to be counted as one? But, you know, it's given so I'm just really thankful."

The actor-singer also acknowledges Star Magic for helping him reach the showbiz status he enjoys now.

Since he started in 1994, Piolo has gained several recognitions. He has received Best Actor awards from distinguished award-giving bodies like Gawad Urian, Film Academy of the Philippines, FAMAS, Golden Screen Awards, and Star Awards. In music recording, Piolo has already released seven albums.

Last year, Piolo ventured into production to help the movie industry. He co-produced the 5th Cinemalaya Philippine Independent Film Festival's opening film Manila and the blockbuster comedy movie Kimmy Dora. The sequel of Kimmy Dora is reportedly going to be produced by Piolo Pascual and his partners in Spring Films.

"In my short time naman in the business, I never really get this far. But I'm just really honored," says Piolo about his achievements.

"You know, there's a certain responsibility that comes with it. It's nice because it's a different feeling. It's not only you consider it as a responsibility, but it's an honor to be able to serve. Parang you wanna give back not just to the industry but to the family that has given you the break, which is Star Magic."

"EVOLVING" TALENTS OF STAR MAGIC. As part of tradition, Piolo posed in front of the camera for Star Magic's talent portfolio, where he's dubbed as "The One." Unlike in the previous versions, the Kapamilya talents showed their natural look in casual styling in this year's issue.

Piolo believes that all the Star Magic talents who grace this year's Catalogue have evolved since they started in show business.

"With all the past edition, we can see all of the artists evolving. I guess the only difference is that I can see the talents changing every year as they grow older," said Piolo during the Catalogue's launch last week at the Powerplant Mall in Rockwell, Makati.

Star Magic, which has been in the industry for 18 years, is responsible for the stardom of several Kapamilya artists like Piolo, Kristine Hermosa, Bea Alonzo, John Lloyd Cruz, Angelica Panganiban, Shaina Magdayao, Kim Chiu, and Gerald Anderson.

For Piolo, "Star Magic is growing because we can see new talents and talents who have been there for almost 20 years with Star Magic. Talagang we have new talents, but what's important is that we're still intact."