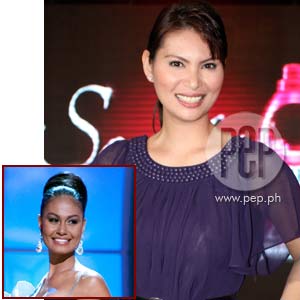 "I'm very happy for her because I know exactly how it feels to be there. And it's not easy to all. To land in the fourth runner-up place is ang laking effort na from her yun. I'd like to thank her for that. Sobrang napasaya niya maraming Pilipino," says former Bb. Pilipinas-Universe Abigail Arenas-de Leon about Miss Universe 2010 4th runner-up Maria Venus Raj (inset).

Thirteen years ago, she fought the same fight that Venus Raj did. Former Bb. Pilipinas-Universe and eventually Miss Universe 1997 Ms. Photogenic Abigail Arenas-de Leon has something to say to Venus's critics: "Be there muna before you can say something bad because it's not really easy to be there."

Venus is still being criticized for her answer in the question-and-answer portion of the Miss Universe 2010 pageant held last August 24 at the Mandalay Bay Events Center in Las Vegas, Nevada. The question asked by judge William Baldwin: "What is one big mistake that you've made in your life and what did you do to make it right?"

The 22-year-old Bicolana replied: "You know what, sir, in my 22 years of existence, I can say that there's nothing major, major problem that I've done in my life because I'm very confident with my family, with the love that they are giving to me. So thank you so much that I'm here. Thank you, thank you so much!"

"To think of her question, hanggang ngayon wala pa ako maisagot sa tanong na 'yon," she said. "Pero I'm gonna have to agree that it was very, very difficult. If I myself was there, I wouldn't really know how to answer that exactly.

"Kasi ang problema dun sa question, it was really tricky. Kasi meron kang idi-disclose about yourself na downside mo, na down moment mo, e. If you are in that kind of high, I don't think you would be able to think of anything na nakakababa sa iyo.

Aside from defending Venus, Abigail expressed gratitude for Venus' achievement.

"I'm very happy for her. I haven't had the chance to meet her personally. I'm very happy for her because I know exactly how it feels to be there. And it's not easy to all. To land in the fourth runner-up place is ang laking effort na from her yun. I'd like to thank her for that. Sobrang napasaya niya maraming Pilipino," Abigail said during an exclusive interview with PEP (Philippine Entertainment Portal) at the Downy Passion and Attraction press conference held last Monday, August 30, at the Manila Peninsula in Makati City.

MEMORIES AND SCENTS. Abigail believes that scents trigger good memories. She revealed that the perfume Beautiful by Estée Lauder is the scent that triggers memories of her experience in the Miss Universe 1997 pageant.

In an excited and reminiscent mood, she said, "I think it is very, very elegant. Alam mo, bibili nga ako ulit nun. Kasi it really smells elegant but not really strong. So, when I was competing for the Miss Universe pageant, I thought elegance every single day. And come to think of it, I was wearing that fragrance. That really made me feel very, very elegant."

However, since being a mom, she has been used to wearing the fruity and fresh scents.

"I'm not really a perfume person, if you can call me. Mas fresh scent ako, bagong ligo scent. That is my most favorite scent," she said.

"Yung scent has something to do with our inner self. We all know that look good, feel good. Yun 'yong magkasunod, e. Pero one way to look good is actually to smell good. Kapag alam mo na amoy malinis, amoy masarap na amoy, then that would actually give you a good feeling," the former beauty queen explained how smelling good is paramount in looking good.