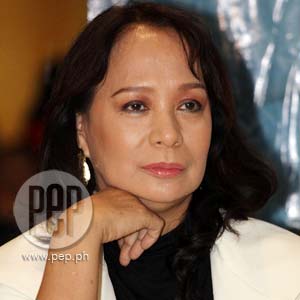 "Let me clarify it once and for all. People should have the right to say or to answer [questions] in whatever language they want to say it in. If they're Cebuanos, they can say it in Cebuano. I did not say that they did not speak English," explains Gloria Diaz about her previous statement that allegedly insulted the Cebuanos and made her "persona non grata" in the Queen City of the South.

Former Miss Universe Gloria Diaz's statement about getting an interpreter for Philippine representatives to beauty pageants has earned criticism from Cebuanos.

In a previous interview with ABS-CBN reporter Mario Dumaual, the 1969 Miss Universe agreed that maybe it's about time for Filipina beauty queens to get an interpreter during the question-and-answer portion of international beauty pageants. This was in reaction to Maria Venus Raj's "major-major" answer during the Miss Universe 2010 pageant where she finished 4th runner-up. (CLICK HERE to read related article)

Gloria Diaz said, "That's a good suggestion, especially we have Filipinos all over the world who can interpret anything. I think she thinks in Tagalog and answers in English. But I can relate to that because I used to think in English and answer in Tagalog, and it was very difficult for me."

She suggested that our candidates should have an option to answer in their native dialect. "Kasi, when you think about a Cebuana can hardly speak English and, of course, Tagalog, maybe she should answer in Bisaya," the actress explained.

This remark irked Cebuanos and prompted them to call for a public apology from Diaz.

"It is with much regret that Diaz, who once brought glory to this proud nation, has awakened a sleeping giant: Cebuanos' strong aversion to anti-Cebuano insulting remarks," she said.

Rep. del Mar added, "I therefore call on Diaz to issue a sincere public apology to the Cebuano people. It is the most responsible thing to do as the battle for national unity rages."

Following this, Bombo Radyo Philippines reported on its website that the Vice Mayors League of the Philippines-Cebu has issued a resolution declaring the former Miss Universe "persona non grata" in the Queen City of the South.

GLORIA EXPLAINS. Diaz clarified that she never said Cebuanos cannot speak English or that her statement meant to insult them.

In an interview with ABS-CBN News, she said, "Let me clarify it once and for all. People should have the right to say, or to answer, [questions] in whatever language they want to say it in. If they're Cebuanos, they can say it in Cebuano. I did not say that they did not speak English.

Diaz was also shocked when she found out that people got angry over her statement.

"I was like, shocked. Everybody was so angry. I thought they're gonna stone me to death!" she said with a laugh. "I want to just make people realize it is just... You know, say it with whatever you're comfortable with."