Cesar Montano gets naughty on the cover of new FHM Collections 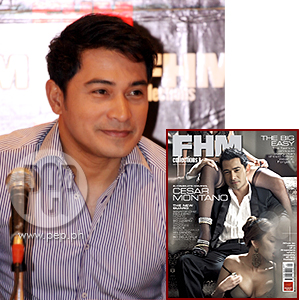 FHM's managing editor Allan Hernandez explained to PEP (Philippine Entertainment Portal) and other members of the press at their presscon yesterday, September 2, at the Bahia Room of the Hotel Intercontinental in Makati City, why they got Cesar for their cover.

Cesar's cover is noticeably different from Robin's 2009 cover. While Robin stood solo and projected a "dangerously sharp" look, Cesar looks relaxed and cool sitting between two ladies (one behind him and another in front) who appear to be wearing just their undergarments. What's more intriguing—and reason enough for envy among the men present at the presscon—is that Cesar's head is positioned between the legs of the lady behind him.

What was his wife Sunshine Cruz's reaction to his FHM cover?

"But this one [points at his cover], hirap na hirap nga ako diyan, e," Cesar says while laughing. "No, hindi naman ako nahirapan. Sunshine, my wife, basically is very, very level-headed and broadminded herself about these things."

Speaking of his wife, since Sunshine holds the honor of being the very first Filipina cover of FHM, is it okay for him if she poses sexy again for FHM ?

"Siguro dapat siya ang tanungin natin. Ako, I've been a huge fan of FHM. Talagang tinitingnan ko kung ano ang mga bago nila, not for the nudity, but ideas that I could also use in filming, mga gano'n. Minsan nakakakuha ka dun, e. But me as an artist, I totally respect the artistry of FHM when it comes to photography and how to use talent, how to use a certain person sa print. Yun po ang nakikita ko.

"But seriously, she loves it [her cover photo] and I love it too."

As for her second serving of sexiness in FHM?

FHM Collections is the September issue of FHM. Bb. Pilipinas-Universe 2009 and Magkaribal star Bianca Manalo is the flip-side cover of this issue.