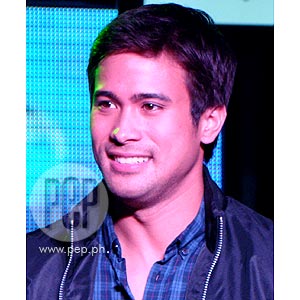 "Kung sakaling may ma-develop, may made-develop 'yan," replied Sam Milby when asked if there's a possibility he'll have a special relationship with Idol co-star Sarah Geronimo.

Sam Milby doesn't feel threatened with the entry of foreigners who want to try their luck in local show business. In fact, he gladly welcomes them to the industry.

One of the blessings Sam is now being thankful for is his part in ABS-CBN's upcoming musical dramedy Idol. He said this TV seriesis more demanding than his previous projects but it's more fun.

His character Vince, he said, is different from past roles he has portrayed.

WORKING WITH SARAH. He had really looked forward to doing Idol because of the chance to work with his "idol" Sarah Geronimo.

"I'm a fan," he said, also admitting that he got nervous during his first taping day with the Popstar Princess.

The singer-actor went on to say though that his admiration didn't automatically mean he was going to court Sarah.

NO DATE FOR THE STAR MAGIC BALL? On Sunday, September 5, ABS-CBN's talent arm Star Magic will hold its 4th Star Magic Ball at the Shangri-La hotel in Makati City. During this annual event, the invited media always look forward to seeing which celebrity will date whom for the night.

Last year, Sam arrived with his now ex-girlfriend Anne Curtis. Who will be his date at the star-studded event this year?

"Wala akong date," answered a smiling Sam. He said he's not dating anyone exclusively, but he is aware that Anne is now going out with young businessman Erwan Heusaff.

The Kapamilya actor said that he knows Erwan, so he approves of whatever relationship he has with Anne.