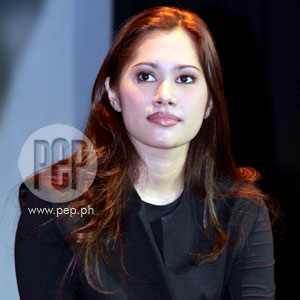 "It's not easy being the only daughter of the Pop Diva," laughs Isabella, who wrote most of the songs in her debut album. "Many people expect so much... My mom had a colorful and successful career and I could not match that in any way. That's why I need to have my own identity. I need to be myself."

"I made a chart of my life and this is one big part of it," nakangiting sabi niya. "The album is really about my life. Me being a daughter, a friend, and an inspiration to other people. I have my influences and they were good ones. I just want to share this part of my life to the people who believed in me from the very beginning."

"It's not easy being the only daughter of the Pop Diva," sabay tawa ni Isabella. "Many people expect so much... they expect me to follow whatever my mom did. My mom had a colorful and successful career and I could not match that in any way. That's why I need to have my own identity. I need to be myself."

"In the past, I wasn't ready to embark on this grand journey of expressing myself musically. I had to learn who I was first as a person so that I would have something to share with the public.

"Perhaps, I needed to go through trials and challenges that would help give me something to write about so that I could connect with others. Because now I realize that I don't just want to sing songs, I want to reach out to people through songs to comfort and perhaps even help encourage them through the lyrics of these songs.

"Now that I have an album entitled iDENTitY, I guess this album is coming not after the long time but at just the right time, now that I have a message to share and the ability to share."

"It is spelled as such because I long to make a D-E-N-T or impact with the Lord. That's really why I chose that word, and because my identity is firmly established in who I believe in and the change that He had made in my life, the fact that I write [from] the standpoint of a new iDENTitY that I have in Him."

"My dad wrote and composed the song 'Dance In Your Light.' He promised me that song and now it's here in my album," madamdaming pahayag ni Isabella.

"My mom and I, we've been through a lot in life. She's always there for me and I am here for her as well. Though we may have many differences and misunderstandings along the way... we're still together.

"I give credit to the Lord for giving me this family... for giving me my parents. Though it's not perfect, but we try to make it perfect for one another."

Isabella's solo album was produced by Bravo Records and distributed by Viva Records with the support of the Music Museum Group and in partnership with Mossimo Music whose advocacy is to help children born with cleft lips and palates.

The album contains 12 songs, two of which are revivals. The carrier single is the remake of the song "I Can't Fight This Feeling (Any Longer)," originally by REO Speedwagon. The single premiered on five FM stations last August 9.

Other cuts in the album are: "Believe," "Divine Reminder," "I've Been Searching," "I Know Someone," "Take Me By The Hand," "Fatherless Child," "Care and Give," "More Than Conquerors," "The Darkness Flees," "Overcome" and the remake of "Soulmate" by Natasha Bedingfiled.