PEP EXCLUSIVE Chokoleit on Cristy Fermin: "I'm just giving her the dose of her own medicine." 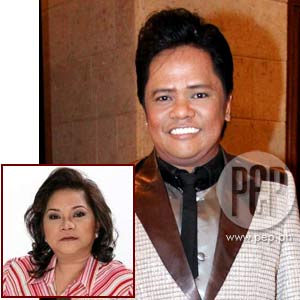 "Until she is asking for it, then I'll give it. I'll give what she's due. I'm just giving her the dose of her own medicine. 'Kung ayaw mong tumigil, e, di hindi na din ako titigil.' Ganun lang," Chokoleit said to explain his position towards Cristy.

The rift between the two surfaced in late August, when Cristy filed "unjust vexation" and "libel" cases against Chokoleit, after the stand-up comedian allegedly cursed the veteran columnist on his Twitter account. (CLICK HERE to read related story.)

For his part, Chokoleit said that his tweets were a justified reaction to the accumulation of hits against him in Cristy's columns. He added that he acted responsibly and that he knew the repercussions of his moves.

MEAN ACT. Chokoleit admitted that the final straw for him was when Cristy picked up material from YouTube that, he fumed, denigrated him and Pokwang. Apparently, Cristy used the material in the TV5 show Juicy, where Cristy sits as the veteran host.

Chokoleit is a close friend of Pokwang, who has also reportedly been the object of negative remarks in Cristy's columns. Pokwang is said to have gotten on Cristy's wrong side after the comedienne-host had a tussle with Willie Revillame, Cristy's friend and ally.

"It all started, like, when she picked that up," Chokoleit said, referring to the offensive YouTube material. "Hindi naman ako, e. Nanahimik naman ako, e. Marunong naman akong rumespeto."

NO APOLOGIES. Answering Cristy's comment that his tweets were too much ("Hindi makain," Cristy said), Chokoleit said, "That's because, that much says kung sino siya."

The veteran stand-up talent said that he stood by what he tweeted, and would not apologize even if Cristy had earlier said, in her showbiz talk show Paparazzi, that she could forgive him if he apologized.

"No, bakit ako magso-sorry?" Chokoleit responded, sounding both angry and hurt. "For the longest time, grabe ang tira niya sa akin. She had it coming, parang sobra na yun. I know it is part of the job, may pitik- pitik, pero sumobra na!

Chokoleit stressed that this was not just a feud between Cristy and Pokwang. This was also a matter affecting Cristy and him directly.

He admitted that his comments about Cristy have their roots in the past, when the veteran entertainment columnist allegedly made him a target of ridicule in her columns.

"Para bang, if the big stars can afford that, I cannot, because magkano lang naman ang kinikita ko?"

LIBEL CASE. Chokoleit also disclosed that he is filing a separate libel case against Cristy, and that he is determined to pursue the case because he stands on just ground.

"Yes, my work is at stake. Para bang sumosobra. I gathered enough tabloids [as evidence]. Nandun, e," he told PEP.

"So this will be a test case, while importantly, there is no such thing as Internet libel. Under the law on libel, Internet is not included as medium of committing libel.

"In fact, she is the one liable for libel since she maligned you in print and on TV. Those are the mediums provided under the law on libel, di ba? We will file a libel case against her. We are waiting for the subpoena to come."

According to Chokoleit, he has the full support of his family. He said they understood that he felt aggrieved and abused, and told him: "Whatever you think is right...do the right thing. "