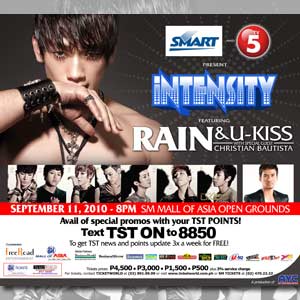 Korean pop singer and actor Rain will perform at the SM Mall of Asia Concert Grounds on Saturday, September 11 in a concert titled Intensity.

Korean pop superstar Jung Ji-Hoon—known simply to music fans as Rain—failed to show up at his own press conference this afternoon, September 6, at the Manila Hotel in Manila.

The press engagement was originally called at 2 p.m., only to be canceled at the last minute by the organizers. A representative from Rain's management team later told the invited members of the press and guests that a "miscommunication" had transpired between them and the Philippine promoters concerning the date of the press conference.

Speaking with the help of an interpreter, Mr. Jung explained that Rain's team thought that the press conference will be held on Thursday, September 9, and not Monday, which is today.

Rain's management group, Mr. Jung added, picked September 9 as the date of the press conference during the time they were organizing the 28-year-old singer-actor's Manila itinerary.

The popular Korean celebrity is here in the country to do a one-night concert this Saturday, September 11, at the SM Mall of Asia Concert Grounds in Pasay City. Smart Communications and TV5—two companies that are owned by businessman Manny V. Pangilinan—are sponsoring the live music spectacle.

Korean pop group U-Kiss along with our very own Christian Bautista will be special guests at the concert dubbed Intensity.

Rain, who arrived quietly in Cebu last September 1, is in the country to shoot a Korean television series titled Fugitive. The series, according to reports, will be shown in the Philippines via TV5 under the title Runaway.

Born in Seoul, South Korea, on June 25, 1982, Rain has successfully juggled an acting and singing career even outside his home country. His stint in the popular Korean drama series Full House (2004) has endeared him across the Asian region, including the Philippines.

Rain was also seen in the Hollywood film Speed Racer (2008) and even topbilled the 2009 action flick Ninja Assassin.

To date, Rain has released seven albums, which overall have churned out 19 radio singles. His success prompted him to put up his own company in 2007 named J Tune Entertainment.