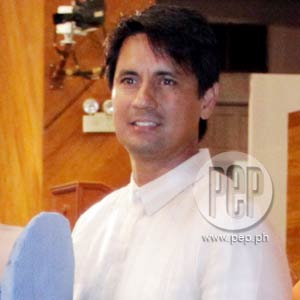 "We show Julianna the importance of doing the projects for the people para magkaroon siya ng compassion. Julianna is also one of the lucky kids who is able to eat three times a day. We show her that these are the people who cannot even afford to eat once," says Richard Gomez about the feeding program he and Rep. Lucy Torres-Gomez initiated.

He started a new account last May and he's been able to share his views and exchange ideas with other personalities. He also keeps people updated with news about his wife, Leyte Rep. Lucy Torres-Gomez.

"I've had my Twitter account for a long time already. I was just very inactive. I first saw Twitter on CNN about two or three years ago. Kapag may time ako mag-computer, bubuksan ko ang computer ko," Richard told PEP (Philippine Entertainment Portal) before his taping for My DSL: My Darling Sweet Lover, his new television series for TV5, in Mandaluyong City.

Paliwanag ng aktor, "Dapat yung mga tao ni Noynoy should really focus on what the president really wants rather than what they want to do for their personal ambitions. Kasi medyo the way I see it, medyo mayroon silang mga kanya-kanyang gustong puntahan. I think it's about time that Noynoy makes sure na buo ang grupo niya.

"Ang daming trabaho!" natatawang pahayag ni Goma nang tanungin siya ng PEP sa bagong papel na kanyang ginagampanan. "Even if you're sleeping, you're still thinking. Sometimes I wake up in the middle of the night and I have to do this."

Ani Richard, "The good thing about the Lower House is there's a mix of people, not just lawyers, which is good for creating laws. You have farmers, you have businessmen, you have athletes. You have people from all walks of life. That's the way Congress should be.

"Yung sinasabi nila na dapat abugado ka to be in Congress, I feel that's wrong. Congress is really for people of all types. You have a feel on what really happens on Congress."

"Siguro, I'm a big threat to other politicians, that's the way I see it," sabi niya. "A lot of people, when I entered the scene, 'may kalaban!' Maybe that's the way they see me. They think that I'm a threat. But the fact is, I just want to do something good for the people.

"In a way, yung passion ko for politics is also working out. I'm just doing a different role although connected to what Lucy is doing. I'm doing the paper work. I write letters to government agencies. Mahirap na trabaho. Mahirap talaga.

"You have to be conscious kung ano ba talaga ang kailangan ng mga tao sa lugar namin. You also have to put in the right words. There's also a possibility that your letter will be rejected or your request will be turned down. For projects to work kasi, you need sufficient funds. Wala pang nilalabas na funds this year."

In a recent YES! magazine feature on Richard and Lucy, the couple embarked on their first few days when Lucy began her term.

"We already started our sports program in Ormoc," Richard said as he prepared for his scene. "We also have a feeding program. We feed a lot of school children. We've fed around 10,000 children since Lucy started her term as congresswoman.

"Maawa ka talaga sa mga bata doon. We found out that there are a lot of malnourished children in our district and there's really a big need for them to be healthy. Schools need extra classrooms. Madami pa. A lot of roads need to be concreted.

"We also need to boost the tourism program of Ormoc and her district. We really have to work on bringing industries for us to create more jobs. Ang daming tao doon. Siguro 55 to 70 percent of people don't have work. Siguro yun yung difficult task para kay Lucy, which is to provide opportunities for people."