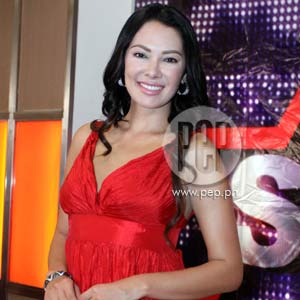 "I want a real man who can stick up for me. I want a man who walks side by side with me or walks in front of me. He also has to be God-fearing," says Ruffa Gutierrez.

The incident happened during Ogie Alcasid's birthday celebration last August 27, at the clubhouse of the Ayala Hillside Estates in Quezon City.

What did Angeli say that irked her?

Ruffa later told PEP (Philippine Entertainment Portal) that she wants to distance herself from Angeli, who heads Genesis Entertainment, for some time.

"We texted each other and right now, everything's quiet. I'd like to believe na tapos na ang issue na yun. For me, wala na sa akin yun.

"Pero based sa mga text namin sa isa't isa, kami ni Tita Angeli, we need a bit of space from each other.

JUST FRIENDS WITH CESAR FLORES. For some time, Ruffa was linked to Cesar Flores. But earlier today, the actress-TV host stressed that she has decided to just be friends with the president of Smartmatic-Asia Pacific.

"I just want to be careful because I have two kids to take care of and I don't want to jump from one relationship to another," says the single mother of two.

What hinders her from entering a relationship right now?

"There are things that I'm looking for in my next relationship and, I guess, because of Lorin and Venice, my list gets longer and longer. I think that's my right as a woman," she says.

Ruffa adds, "I want to be with someone who is single and, definitely, I'm not gonna go for a married man."

She enumerates the qualities that she likes in a man by saying, "I want a real man who can stick up for me. I want a man who walks side by side with me or walks in front of me. He also has to be God-fearing."

STAR FACTOR. TV5 will soon be introducing the 18 hopefuls who will compete in the reality-based star search called Star Factor.

This Sunday, September 12, the 18 finalists of Star Factor will be introduced and one of them will win P1 million cash, a contract with TV5 worth P1 million, and a 3-bedroom house and lot worth P3.7 million.

The finalists also have the chance to become part of the pool of artists to be groomed under Talent5, the talent management and development division of the Kapatid network.

Ruffa says she is looking forward to hosting Star Factor because it will be her second show on TV5, the other being TV5's showbiz-oriented talk show Paparazzi.