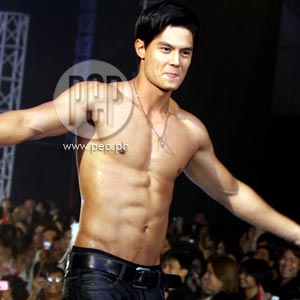 "I did talk to her and told her I'm gonna do the Cosmo show, she liked it. You know, she was very supportive," says Daniel Matsunaga about girlfriend Heart Evangelista.

"I did talk to her and told her I'm gonna do the Cosmo show, she liked it. You know, she was very supportive," Daniel said after the Cosmo Bachelor Bash last September 9 at the World Trade Center, Pasay City.

However, Heart was unable to attend the show. She was in the United States of America at the time. Heart's stay in the U.S is scheduled for 17 days; she left last September 1.

According to Daniel, his relationship with Heart is going very well.

Daniel admitted the real score between him and Heart in an exclusive interview with PEP last September 2, during the Fun Run launch of Blue Water Day Spa, at Encore (the former Embassy SuperClub), in The Fort, Taguig City. (CLICK here to read related story).

COSMO BACHELOR BASH. Daniel said that he prepared for about a week for this year's Cosmo Bachelor Bash, and that his preparations for this year were not too different from last year's.

"It was almost the same. I had a lot of training in the gym and a lot of exercise, less sugar, more protein, more vegetables, and, for like a week, you know, lose fat and be ready for it!"

Last year, he was also included in the list of the Cosmo Celebrity Centerfolds. What made this year different?

"Every time we go, there is a different thing going on. Like, this time, everybody is screaming, super nice.

"Like, everybody getting crazy, and every time is very challenging because every time, people get, like, really crazy.

"So, I really enjoyed it. It's a pleasure every time to do the show."

After two Cosmo shows, will we be seeing him again next year?

"Of course! If they invite me, I'll be there for sure!" he said confidently.