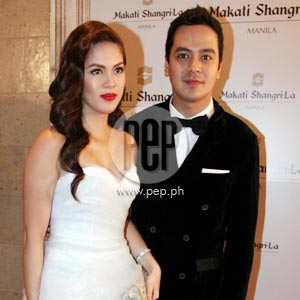 This photo of John Lloyd Cruz and Shaina Magdayao was snapped on September 5, the day after the couple's alleged evening dash to St. Luke's Medical Center.

This was the headline of the first published blind item that set off a full-blown tittle-tattle about showbiz couple John Lloyd Cruz and Shaina Magdayao.

After more than three weeks, embellishments have been added to the original story.

The time it allegedly happened was also moved — from last week of August to first week of September.

Interestingly enough, not one of the gossipmongers could claim they saw the incident happen right before their very eyes.

The possible closest link to first-hand information would be posts on Internet forums and blog sites, where a few cited "a nurse-friend," or "the cousin of a boss," or "a tito who's a doctor," and even "a dad who knows Enchong Dee's dad" had confirmed the report.

But they all mentioned different dates. One wrote that it happened on a Friday, September 3, while another said "madaling araw ng Sabado," September 4.

Unfortunately, no one could provide details.

And what was even more alarming was that not a single one bothered to ask for proof.

WHERE IT ALL BEGAN. In this day and age, it only takes one text message, a single email, or a solitary blog post for a rumor to spread like wildfire.

In a phone conversation at 3 p.m. today, September 16, with the blind-item writer Ruben Marasigan, he said the first time he heard about it was "August 25."

PEP asked him: "Where did the production people get such a story?"

He said he couldn't establish the source of the story, so he published it as a blind item last August 27 in "Rubbing Elbows," his column in Pinoy Parazzi.

The columnist, who's been in the industry for 12 years, admitted that he himself doubted the veracity of the rumor and wrote: "We still have to find out pa kasi kung totoo nga ba ang incident na ito o tsismis lang."

By this time, the muted conversations had grown louder, especially on the Internet, where the names of John Lloyd Cruz and Shaina Magdayao were finally mentioned in bold letters.

WHO SAYS WHAT? PEP spoke to a doctor at the Medical City, who admitted that this "incident" became a topic among medical practitioners last week, not only because it involved two popular celebrities, but more importantly, because it mentioned penis captivus, said to be a rare case in the field.

According to the British Medical Journal, this is a condition where "the spasm occurs during normal sexual intercourse and prevents the termination of the coital connection of the partners."

Vaginismus, on the other hand, is "a relatively common symptom, but penis captivus is obviously rare... it has a relatively transient symptom with consequences that are less sensational than those fabricated by rumor."

The doctor said he decided to ask colleagues affiliated with St. Luke's and got "conflicting" answers.

The doctor told PEP, "One said she heard it from [somewhere else] but not from inside the hospital. Another said, 'Napag-usapan nga na isinugod sila dito sa Quezon City pero walang makapagsabi kung sino talaga nakakita.' Some said sa Global City raw dinala.

PEP also spoke to a nurse from St. Luke's Global City, who claimed she saw the star couple on a stretcher in the hospital's Emergency Room, where she said she also spotted the mom of Shaina.

But when asked if she would go on record with this, she stopped making comments.

Even the posts on various Internet forums never mentioned when this incident was supposed to have happened.

There was one that claimed her mother saw the couple at "St. Luke's," together with Vina Morales, Shaina's older sister, and Diether Ocampo, a friend of John Lloyd, "last Friday (September 10)."

But this is way past the date when the rumor first started.

BLOGS SPREAD THE RUMOR FURTHER. PEP is reprinting the blog items as they appear on the Internet, misspellings and wild claims included:

"its true that couple brought 2 st. lukes hospital coz i sow them may kasama pang 3 maids kadiri yahh actually nakapatong with their blanket"

"guys i was duty in ER during that time, i saw shaina n jhon lloyd, wrap in blanket, pero that time nde pa nmin sure kung ano ang *******, we were thinking na nag tatago lang sila sa media, the only thing is magkaharap sila pero that time nde namin masyadong pinansin, then rumor started to spread na it was a case of vaginismus, we started laughing, kasi hirap paniwalaan, naka usap ko *** doctor na tumingin sa kanila, he smiled at me when i asked him about the rumor, but he never told me directly na ganun na nga nangyari, when i looked back, i think totoo *** tsismis, when i saw both of them mejo stressed **** sila, and we are all convinced na totoo tong tsismis na to, base dun sa way na pumasok sila ng hospital na magkaharap na my kumot pang nakabalot"

"last friday my mother told me he saw john lloyd cruz ,vina morales, diether ocampo in st.lukes and am just smiling because am not already familiar in the issue bcos i dont' have free period to watching television until my classmates told me now about the malicious issuue of the couple john lloyd and shaina i was shocked in the issue =("

Shaina also broke her silence this afternoon, September 16, stating calmly: "It is the most outrageous tsismis sa industriya natin."

PEP got in touch with St. Luke's vice-president for customer affairs, Marilen Lagmiton, who declined to comment.

"'Wag na lang," she said. Then she added, "It's totally ridiculous. It's malicious. It doesn't merit any statement."