Lea Salonga is excited to sing at Ogie and Regine's wedding 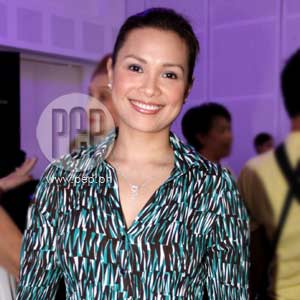 "Be open, [don't] close yourself off and say 'yes' to blind dates because you'll never know, " says acclaimed international singer Lea Salonga on finding "the one."

Filipino international singer and Broadway actress Lea Salonga expressed excitement over the possibility that she could be singing at Ogie Alcasid and Regine Velasquez's wedding during an interview at the Town and Country Wonder Women Awards yesterday, September 14, at White Space, Makati City.

THE WIFE. Lea, herself, has been blissfully married for six years to Robert Chien. Asked how she found her true love, she replied: "True love is not something you find, it finds you. It is something that happens in its own time. It seeks you when you least expect it. That's how it happened to me."

She described how she met her husband.

"I wasn't looking for my husband then but, lo and behold, I was introduced to him. On our first date, I knew he was the one," said Lea.

Robert is a cousin of a fellow cast member of Flower Drum Song, the Broadway musical that Lea starred in 2002.

Lea and Rob met on a blind date. They tied the knot in January 2004 at the Cathedral of Our Lady of Angels in Los Angeles, California.

"It happens when you least expect it," Lea said.

She added, "I always give this piece of advice: Be open, [don't] close yourself off and say 'yes' to blind dates because you'll never know."

THE MOM. Lea and Rob are blessed with a daughter named Nicole. Asked if Nicole would be following in her footsteps, Lea exclaimed, "No, no! She is only four and I just want her to be four. That's all I want for her."

She said she didn't want Nicole to be in the entertainment business just because her mom is in it.

"I don't want her to be anything, or to feel any pressure that she has to enter [the business] or that I'm grooming her [to join] the business."

Lea may have other plans for her daughter.

"Like now, she is showing signs that she might be really good as a dancer. I mean, she's got beautiful lines and beautiful expressions, and long arms, long legs—she's tall.

"So, I'm thinking ballet, or athletics, or sports... that seems to be the path I may encourage her."

In a jovial mood, she said, as if talking to daughter Nicole: "Like, leave the singing na lang to Mommy."

THE DAUGHTER. Lea mentioned her mom, Ligaya Salonga, as her "wonder woman" on top of achievers she looks up to and admire.

Lea attributed her success to her mom for raising her and her brother Gerard.

"She is a great mom and she loves raising her children, and every one of them was super passionate about theater and the arts and of their work," the proud daughter said.

THE WONDER WOMAN. Achieving success in both her personal and career life, Lea said there was nothing more she could ask for at this point in her life.

"I feel very very blessed to have my career, my family, to be able to travel and to have a measure of anonymity when I travel, and that I still can have a life and do my work.

"I couldn't ask for anything more. God is so giving," Lea said.