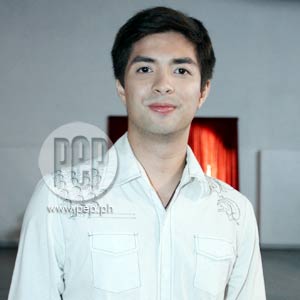 It was during the press conference of Muli last September 14 at Max's restaurant on Roces Avenue that Joross Gamboa learned that his ex-girlfriend Roxanne Guinoo had already given birth.

The actress, who is set to marry her boyfriend Angelo Elton Yap, gave birth at the Medical City in Ortigas.

Joross says that he does not regret that his relationship with Roxanne did not work out even though they were together for more than a year.

Is Joross ready to have his own kids now?

The actor is currently in a relationship with his non-showbiz girlfriend Katz Zaga.

What was her reaction when she saw him walk shirtless during the 10th Cosmo Bachelor Bash as one of the Celebrity Centerfolds?

In Muli, Joross Gamboa plays the son of Cogie Domingo and Maxine Eigenmann.

The filmmakers used makeup to make Cogie look much older than his actual age. (CLICK HERE to read more about this indie film)

Joross recalls a funny incident in the past involving his mother and Cogie.

Directed by Adolf Alix Jr., Muli will be screened in cinemas starting September 22.

Joross will then star in another indie film titled High, which will tackle the problems of youth today.

On television, he was last seen in GMA-7 shows such as First Time and Dear Friend Presents Tisay. He has also appeared as a guest on TV5 shows such as 5-Star Specials.