FIRST READ ON PEP It's official: Willie Revillame is with TV5 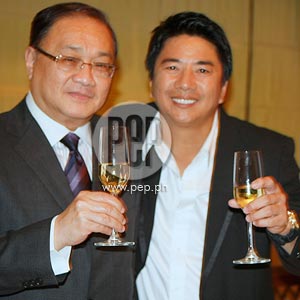 Game-show host Willie Revillame (right), who rescinded his contract with ABS-CBN amidst legal issues with the Kapamilya network, has signed up with TV5, whose chairman Manny V. Pangilinan, a.k.a. MVP (left), said his Kapatid network had simply responsed to "the public clamor." Willie is seen with MVP toasting to their new alliance in this September 7 photograph.

The Philippine Entertainment Portal (PEP) has received official word from TV5 that Willie Revillame is now a Kapatid talent.

In a statement that the station wanted embargoed until today, Saturday, September 18, TV5 said Willie is now the "certified talent of the newest and most aggressive broadcast network in the country."

While the statement reveals the name of Willie's new show as Willing Willie, it does not mention a clear timeslot for the show except to say it will appear on "primetime."

The following is the official press release of TV5:

"Fans, supporters and viewers of popular host Willie Revillame will surely have reason to rejoice because their idol will definitely return on TV as a certified talent of the newest and most aggressive broadcast network in the country, TV5. Now an official TV5 Kapatid, Willie will soon be hosting a new variety and game show entitled Willing Willie on primetime which will surely endear him more to his legions of followers all across the country and around the world. The program is managed by Wil Productions Inc. and is co-produced with TV5.

"'In a contract signing held recently, TV5 Chairman Manny V. Pangilinan (MVP), welcomed Willie in the network's stable of growing talents. 'We have responded to the public clamor and we look forward to collaborating and working with the team of Willie and (Viva) Boss Vic del Rosario in bringing the audience the best in Philippine entertainment,' MVP said.

"Willie rescinded his contract with his former network after his lawyers settled the legalities of his situation and gave him the go-ahead to sign up with TV5. This is good news to all his supporters and fans who felt deprived when the host ceased to appear in his previous noontime show. Willie is undoubtedly one of the few local personalities with a huge worldwide following and TV5 is answering the strong clamor for his return with a new show that will feature him at his best-giving out oodles of prizes and cash to studio audiences and viewers everywhere.

"'It took some time for us to give Willie the go ahead to sign up with a new network because we had to meticulously scrutinize all the technicalities and legalities of the former contract. We wanted to make sure that his transfer will be as smooth as possible, without further legal drawbacks and hitches that can hamper his growth in his new network. With everything we've done and the actions that we plan to do, we believe that Willie is on the clear to work and grow anywhere he wants,' stated Willie's lawyer, Atty. Joel L. Bodegon.

"Willie's new manager and business partner, Vic del Rosario, reveals that the decision to join the Kapatid network was because of TV5's new management directions to bring quality program and excellent production on television. 'Willie's new show will undoubtedly bring joy to his legions of fans both here and abroad and will set the bar for primetime entertainment in today's television,' declared Boss Vic."