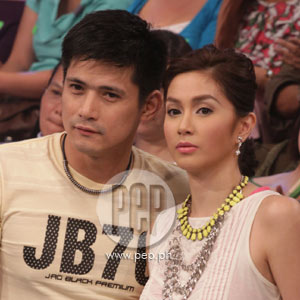 As the media and the public continue to speculate on whether or not Robin Padilla and Mariel Rodriguez are indeed married, relatives of the action star are claiming that the ceremony on September 13 only marked the engagement of the celebrity couple.

In an interview with TV Patrol aired Monday, September 20, Carol Tibayan, a cousin of Robin, said: "Robin called me up September 5, Sunday. He told me, 'Akyat kami kasama si Alih, si Kylie, at si Mariel.' What I did, I got in touch with Tita [Mrs. Eva Cariño Padilla, Robin's mom] and told her, 'Tita, they're coming up, let's plan something.'"

Judith Pavia, Robin's aunt, said, "When the real marriage [happens], we will make the necessary announcement."

ABS-CBN reporter Maira Wallis reported on TV Patrol on Monday, September 20, that the civil registrar's office of Baguio confirmed that Robin and Mariel did not apply for a marriage license prior to the native ritual conducted by Jimmy Ong, a mambunong or native priest.

But the mambunong insisted that the ritual he performed with Robin and Mariel is "valid."

According to the National Commission on Indigenous People (NCIP), if the ritual did take place last September 13, then the marriage is considered a legal one.

Marvin Binay-An, the barangay chairman of Camp 7 in Baguio City, the area where Robin and Mariel's Ibaloi wedding took place, said it would be an insult to their tribe if the couple had gone through the ceremony just for their show.

Binay-An stood as one of the witnesses of the alleged marriage between Robin and Mariel.

Robin claimed that the ritual has something to do with an upcoming show of ABS-CBN, but he refused to elaborate and would only do so "sa tamang panahon."

The action star also claimed that he neither denied nor confirmed that a marriage had taken place.

The revelations made by Robin's relatives contradict statements made earlier by the actor's mother, Mrs. Eva Cariño Padilla, in a phone interview with Showbiz Central on Sunday, September 19.

Mrs. Padilla said that she was able to speak with Robin and Mariel at the despedida of her grandson Alih.

She congratulated them on their wedding, and added that the couple said "thank you."