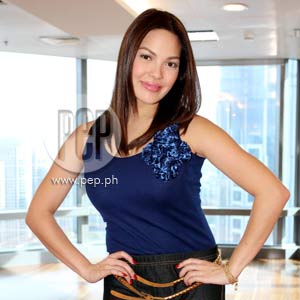 KC Concepcion would rather "roll with the punches" than think of the pressures now that her morning talk show, Simply KC, got a new lease of life from home network ABS-CBN.

At the press conference of Palmolive Aroma Vitality shampoo on September 21 held at the Movement Dance Studio, Union Bank Plaza in Pasig City, KC happily announced that Simply KC will be seen until the end of October.

Since August, the show has been rumored to be on its way out apparently because of poor ratings. Management, however, opted to retain the program (launched May 24) on its early morning time slot.

The show has, so far, shown an improvement on its past ratings.

Meeting different people from diverse backgrounds has been challenging and fun, the 25-year-old actress and host added.

Aside from talking to fellow celebrities and public figures, KC also gets to interact with ordinary folk on a daily basis, since she often ventures outside the studio to feature city life.

When asked if she feels her talk-show hosting skills have improved over time, she replied, "That's not for me to say. But I'm more comfortable and I enjoy every single taping day. Feeling ko ang dami kong natututunan."

KC is not sure whether the extended season of her show will adopt a new format to bolster ratings and overall audience appeal.

She said the show's old formula was "experimental," and being able to attract a loyal audience base despite its 9:30 a.m. timeslot was already an "achievement."

CHOOSING HER FRIENDS. KC was asked to comment about the ongoing feud between fellow Kapamilya talents, Toni Gonzaga and Mariel Rodriguez.

Mariel and Toni — who juggle acting and hosting — were good friends before they had a falling-out.

Toni had refused to elaborate on the issue during a press conference held last September 15 at ABS-CBN's 9501 restaurant in Quezon City.

Incidentally, Toni is KC's co-host on the Sunday entertainment talk show The Buzz, along with longtime host Boy Abunda (who is Mariel's talent manager) and former beauty queen Charlene Gonzalez-Muhlach.

"Where do I stand between Toni and Mariel?" KC paused.

She shared her thoughts on how to maintain friends and associates in the highly competitive world of show business.

"I know it will come naturally, kung sino man ang meant to be na maging kaibigan ko—mangyayari at mangyayari 'yon."