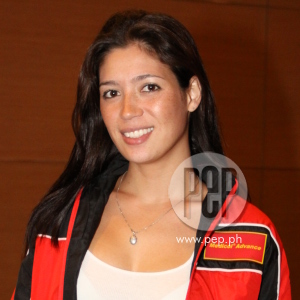 Asked if she wants to become a Survivor Philippines castaway again, Amanda replies, "Oh yeah, of course. I would love to go back to the island. I hope I don't get voted off first, I hope I make it sana far, pero of course, target talaga. Nanalo na 'yan, tanggalin na 'yan. But I'm still gonna work it."

Amanda was the winner of Survivor Philippines: Palau, which ended in November last year. Unlike JC Tiuseco, the previous winner, Amanda chose not to pursue a career in showbiz. She would occasionally have guest appearances on TV, but she had nothing regular going on.

Amanda's absence on TV made fans wonder why she did not become an artista.

"Kasi, I'm not really the artista type," Amanda told PEP. "It's not really my world. I tried it, it's really fun! And every now and then, [I have] guestings, which I really enjoy."

Amanda said she didn't sign a contract with GMA-7 because she didn't want to be cast in telenovelas.

"Yeah, I never signed kasi... I don't know. I have commitment issues... you know what I mean?" she said. "I'm still hoping and wishing na I would sign with GMA-7 but... Pero I know I can't do telenovelas."

What she wants to do, Amanda said, is to host outdoor-type programs, like travel shows.

"Gusto ko hosting lang. Yun, that would be really fun. Like, I'm still hoping and wishing for it. Sana magka-offer ako, sana there would be auditions," she said.

Aside from guesting here and there, Amanda is also busy with product endorsements. One major endorsement is in the works, she said.

BUILDING A RESORT. Amanda is also developing her property in Mindoro, where she was born and raised. She wants to build a resort there.

"Someday, eventually. It's not naman to be rich or anything, it's more of a lifestyle. Parang, if you have a resort, the property can pay for itself. Para self-sustaining ba?" she said.

This is where she has been spending the three-million-peso grand prize she won in Survivor. Her purchases include a bulldozer, four-wheeler trucks, and construction materials for building a road to the property.

"We built a road, but we need to build another one. Kasi yung ginawa namin, masyadong steep. It's up in the mountains... Right now, I'm working on getting right of way, siyempre to help din yung mga taong nakatira sa bundok," she said.

Amanda said that, being in Mindoro, she feels like she's still competing in Survivor.

"Everytime I go to Mindoro, I have to walk. I take a tricycle, but I have to walk to get home. Right now, it's basically Survivor living na naman. Wala kaming kuryente, we have a little generator—but it's fun. It's worth it!"

Since her whole family is in Alaska, Amanda lives alone in the mountains of Mindoro. But she hopes to join them for Christmas.

"I decided to stay because I like it here, pero I'm going home in November.