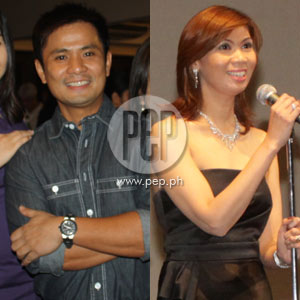 Ogie Alcasid (left) and Ryan Cayabyab's concert, dubbed O.C. at the PICC, will push through on October 8 at the Philippine International Convention Center in Pasay City. Pelita Peralta Uy (right) rued that their request for a tax exemption for the concert's beneficiary, the Organisasyon ng Pilipinong Mang-aawit, was not granted by the city council of Pasay.

O.C. at the PICC will push through in Pasay City on October 8 despite a recent setback that put its producers in a bind.

The concert—which will feature all-original Pinoy music—brings together Maestro Ryan Cayabyab and singer-composer Ogie Alcasid for a one-night-only event at the cavernous Philippine International Convention Center.

The concert aims to raise funds for the Organisasyon ng Pilipinong Mang-aawit (OPM), which is headed by Ogie Alcasid, its newly elected president.

In the September 20 press conference held for the concert, at the Spicy Fingers restaurant in Makati City, the concert producers talked about the treatment they received from the Pasay City council.

Pelita Peralta Uy, managing director of Beginnings at Twenty Plus Inc., and Carmela Honrado, of Star Express, led the call for clear-cut rules stating who can enjoy exemptions from amusement taxes.

In line with this, the OPM has released a statement urging lawmakers to "amend the amusement tax provision of the Local Government Code to exempt all locally produced cultural productions including theatrical plays, dance and musical concerts featuring Filipino talents."

Pelita rued how they were denied an amusement-tax discount for O.C. at the PICC, while producers of foreign acts are granted amusement tax exemptions.

She disclosed that a personal friend, the promoter of the Adam Lambert concert, told her they got a permit without delay and were granted tax exemption without needing to explain their chosen beneficiary.

The Glam Nation concert of the American Idol Season 8 runner-up will be held on October 10 at SM Mall of Asia open grounds, or just two days after the O.C. at the PICC.

She said she was also puzzled because, for the APO Hiking Society concert last February 13 at the SMX Convention Center in Pasay City, their company got a tax exemption.

In other words, she said, the rules of the Pasay City council were not standard.

GETTING A PASAY CITY PERMIT. Pelita detailed the lengthy process they went through to secure a permit for the O.C. at the PICC benefit concert.

"We applied for a request for tax exemption. We requested it for our beneficiary OPM [Organisasyon ng Pilipinong Mang-aawit], but we were declined after several days. Then we applied again for a flat rate or discounted rate.

"Ang tagal bago nila i-release yung permit. Carmela and I then received an invitation to appear in the city council's office to discuss our request for a flat rate.

Initially, Pelita hesitated to go through with the public hearing because, she admitted, she had never experienced something like this. She said that she eventually summoned the courage to face the city council.

Her driving force, according to her, was to be able to explain why they were asking for a tax reduction for their beneficiary institution.

After the public hearing, the council decided not to give a tax reduction to the producers anyway.

Explaining every concert producer's situation, Pelita said, "To get the permit, we needed to pay a down payment ng tax namin na P100,000, which is called a minimum guarantee.

She said she was traumatized by the public hearing, which, she added, was considered an uncommon step in the procurement of a permit.

"It's a very traumatic scenario...standing up there and being questioned. Hindi ako sanay sa ganung scenario," she said.

Pelita also said that the Pasay City officials conducting the public hearing kept asking questions that showed their personal biases. Instead of understanding the nature of OPM, the concert beneficiary, they kept zeroing in on Ogie Alcasid and Ryan Cayabyab, a.k.a. Mr. C.

In Pasay City, there is a 5 percent amusement tax levied on concerts.

But National Commission for Culture and the ArtsCommissioner Elmar Beltran Ingles revealed that this percentage is actually dependent on the local government unit where the concert venue is located.

"Walang magna carta for cultural artists and workers. We need to elevate the arts and culture sector of this country to be an economic force."

CONGRESS SHOULD KNOW. Will this traumatic experience discourage Pelita from producing concerts in the future?

"I will still go on with the vision that I have...a vision to help OPM. I never regretted it," she said.

She told PEP (Philippine Entertainment Portal) that they were sharing their experiences to make legislators aware of what is happening in the local concert scene.

The permit delay apparently had direct repercussions on the O.C. at the PICC benefit concert.

BEST AMBASSADORS. ACT Teachers Party-List Representative Antonio Tinio and Bayan Muna Party-List Rep. Teddy Casiño were present at the O.C. at the PICC press conference to give their comments on the matter.

Rep. Casiño pointed out: "We should specify the parameters for giving tax breaks. Mahirap yung purely discretionary ang criteria. That's one thing we can explore.

"Dapat lamang ang ating mga local producers because, after all, we are in the Philippines and we should develop and nurture our own culture."

When OPM President Ogie Alcasid spoke, he clarified that they were not objecting to the influx of foreign acts in the country.

"We are not against foreign artists," said the country's respected singer-songwriter.

"We welcome them with open arms because they can be the best ambassadors for the country. They can come here and go back to their country and say, 'You know, that place is really cool. It's safe in the Philippines.'

"Perhaps our local producers can enjoy a bit of a tax break. It will encourage a lot of people to produce more concerts."

Speaking as the president of OPM, Ogie said, "We are a non-stock, non-profit organization and we help our members by training them to become better artists, and we are there to help our ailing musicians."

He added, "Part of our objective is also to bring back the glory days of OPM music."