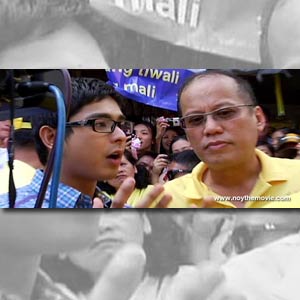 Noy, starring Coco Martin (left), has been chosen as the Philippine entry to vie for a nomination in the Best Foreign Language Film category of the 83rd Annual Academy Awards. The docu drama includes footage of then presidential candidate Benigno "Noynoy" Aquino III (right). The other films shortlisted by the Film Academy of the Philippines (FAP) were Sa 'Yo Lamang, Dukot, Sagrada Familia and

The docu-drama film Noy has been chosen as the Philippine entry to vie for a nomination in the Best Foreign Language Film category of the 83rd Annual Academy Awards.

The Coco Martin starrer was chosen by the Film Academy of the Philippines (FAP) over four A-rated films that were considered for the honor. The shortlisted films were Sagrada Familia and Dukot, both directed by Joel Lamangan; Sa 'Yo Lamang directed by Laurice Guillen; and Two Funerals megged by Gil Portes.

National Artist for Film Eddie Romero headed the special committee of the FAP that selected this year's official entry. It was supposed to have six members but actor Robert Arevalo begged off from voting because he is part of three shortlisted films: Sagrada Familia, Dukot, and Two Funerals.

Three out of the five members chose Noy to vie for the Oscars in next year's awards.

Jose Carreon, secretary of the Directors Guild of the Phil. Inc., was one of the five members that composed the FAP's special committee. He explained to PEP (Philippine Entertainment Portal) why they chose this film.

Noy includes documentary footage of then presidential candidate Benigno "Noynoy" Aquino III as he campaigned in 20 provinces over six months. The campaign period leading to the May 2010 elections serves as the backdrop of the story, which revolves around an aspiring journalist named Noy (Coco Martin) who has to deal with the numerous problems of his family.

Noy is produced by CineMedia Productions, together with VIP Access Group and distributed by Star Cinema.

The story was conceptualized by Coco Martin, Francis Xavier Pasion, and Rondel Lindayag. It was megged by Dondon Santos and co-directed by Coco Martin who served as the documentary unit director.

Aside from co-directing Noy, Coco co-produced of this film.

The producers have until October 1 to submit all the requirements to the Academy of Motion Picture Arts and Sciences (AMPAS), the organization that hands out the Oscars.

By the end of the year, the members of the Foreign Language Film Award Committee of the AMPAS will vote by secret ballot to nominate five motion pictures for this award.

The foreign language films that will compete in the 83rd Academy Awards will be announced on January 25, 2011 at the Academy's Samuel Goldwyn Theater in Beverly Hills. The 2011 Oscar Awards will take place on February 27.