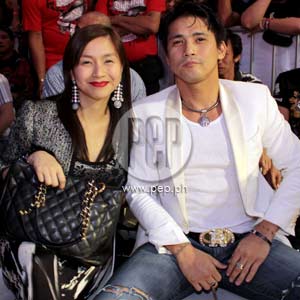 Robin Padilla and Mariel Rodriguez are all over the place.

A few hours after ABS-CBN's showbiz talk show Entertainment Live aired Mariel's interview—in which she publicly announced that a church wedding with Robin may happen before the year ends—the much talked about couple were at the World Trade Center in Pasay City last night, September 25, to grace Dutdutan X.

Dutdutan X: A Decade of Artistic Ink is an annual gathering of tattoo artists and skin art enthusiasts. Now on its tenth year, the event has continuously attracted a growing following of both local and foreign aficionados. Complementing the tattoo art competition are games, exhibits related to the event, a bikini contest, and live rock music featuring mainstream and underground acts.

Robin's presence at the event made sense since the action star, who is known in the industry as the "Bad Boy of Philippine Cinema," has been an ardent fan of tattoos even before the art became fashionable.

Robin has made no secret of his habit of having the names of the women he has been involved with tattooed on his body.

Some of the names permanently inked on his skin are Megastar Sharon Cuneta, theater actress and former Miss Saigon star Monique Wilson, and ex-wife Liezl Sicangco, among others.

Robin took the stage by his lonesome last night, with Mariel quietly staying in the background.

Robin eventually gave the audience what it wanted and proceeded to show off his tattooed body. The crowd, particularly the girls in attendance, went wild, filling up the venue with screams and cheers.

CHURCH WEDDING. Referring to Mariel as his "wife" affirmed what Robin said in a recent interview.

In an interview with ANC anchor Tina Monzon-Palma last September 21, he stated that he and Mariel had tied the knot in India last August 19.

The simple ceremony, added Robin, was carried out at the world-famous tourist landmark, the Taj Mahal, which is located in the city of Agra. (CLICK HERE to read related article.)

Prior to the ANC appearance, the couple was criticized for issuing conflicting statements concerning the true status of their relationship. It was initially reported that the two were married in Benguet on September 13.

In a statement issued days after the story was aired, however, Robin said that the ceremony was intended for an upcoming show with Mariel—giving rise to speculation that the couple were pulling off a publicity stunt to promote a new project. (CLICK HERE to read related article.)

The action star's ANC appearance was designed to put the controversy to rest.

Mariel denied, in her interview with Entertainment Live host and good friend Bianca Gonzales yesterday, that her decision to settle down with Robin caught even her own family by surprise.

"Alam naman nila. It's not likehindi kami nag-uusap. Apat lang kami—me, my sister Kaye, my lolo and my lola," said Mariel. She went on to add that her immediate family has nothing against Robin.

Despite the fact that Robin has been a Muslim convert since 1996, Mariel divulged that a church wedding may happen soon for the benefit of her Catholic family.

"We're talking about it but I want to say it kapag mas klaro na. Parangnear na. Gugulatin ko na lang kayo ulit... And my lolo can walk me down the aisle. I'm going to wear a gown... na isye-share namin with everyone.

"Pero what happened in India, sa amin yun. We don't think naman na masama kami or anything. We just wanted to have something na sa amin lang ni Robin and ni God."

Last night, at the Dutdutan event, the couple mentioned December 25 as a possible wedding date. But they said they first have to visit Mariel's parents in the United States to formalize the plan.