FIRST READ ON PEP: Kris Aquino says she is mature enough to accept that she did not meet expectations for Pilipinas Win na Win! 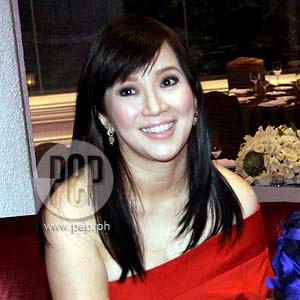 "Kasi hindi naman puwede na mabait lang ako sa ABS when things are doing great. I mean, I had a hit teleserye. Pilipinas Got Talent was such a phenomenal success. So, if in their eyes, kulang ang naibigay ko sa Win na Win, wala akong magagawa except to improve myself," says Kris Aquino.

Kris Aquino said she is mature enough to accept that she did not meet ABS-CBN management's expectations for the network's lunchtime variety show, Pilipinas Win na Win!

She stated this in an interview with PEP (Philippine Entertainment Portal) and other members of the press last night, September 29, during her launch as a comebacking endorser of the Belo Medical Group, at the Shangri-La Hotel in Makati.

"You know, I've reached a level of maturity siguro talaga, na I can accept that I did not meet the expectations," she said.

It had only been two months since the launch of the noontime show that replaced Wowowee, where Willie Revillame served as the main host for five years. Kris and another controversial personality, Robin Padilla—with Valerie Concepcion, Pokwang, and Mariel Rodriguez as co-hosts—became the faces of the Kapamilya network's noontime slot.

The action star, who is a Muslim, left the show early August supposedly to observe Ramadan, while Mariel left to follow Robin to India. Both Robin and Mariel, hounded by the controversy of their "wedding," are on indefinite leave.

The host-actress is the third host to leave. In Kris's Twitter page last September 28, she announced that Friday will be her last day in Pilipinas, Win na Win!

Yesterday, September 29, she tweeted that she did not resign or quit the show, but that she was asked to leave to make room for four new male hosts (CLICK here to read related story).

"I was asked to leave because they wanted to try a new set of hosts. I despoil any power trip. Hindi naman ako nag-tantrums. Uhm, tinanggap ko naman," Kris recounted.

Kris added that even if she knows her caliber, she just has to take this new development positively and deal with it as a challenge. "Kasi hindi naman puwede na mabait lang ako sa ABS when things are doing great. I mean, I had a hit teleserye. Pilipinas Got Talent was such a phenomenal success.

"So, if in their eyes, kulang ang naibigay ko sa Win na Win, wala akong magagawa except to improve myself," she said evenly.

However, Kris said that even though she accepted the decision, and has no hard feelings towards the ABS- CBN management, she could not help posing a question to the big bosses.

"I think best kasi that, when you make a commitment, a commitment shouldn't be one week. And I also expressed this to management. Na ang APO [Hiking Society] binigyan niyo ng ten years ba? Si Willie binigyan niyo ng... pero siguro it took more than a year bago [nag-recover]... Yung sa akin, you expected a miracle?" the TV host-actress revealed.

Turning light, she said that she was quite dramatic when she bid goodbye to her co-workers in the show. She told them that she'll just be like Hollywood actress Julia Roberts in the latter's 2010 movie Eat, Pray, Love.

She added that losing a show did not render a heavy blow to her finances, because she has commercials lined up in the next couple of weeks.

PILIPINAS WIN NA WIN! CO-HOSTS AND STAFF. Kris said that her real concern was for her two co-hosts, whom she will miss the most and with whom she has built a close friendship—Pokwang and Valerie.

"The only thing I asked is if my co-workers would be assured of jobs. Kasi, parang when you share a dressing room, you establish friendship. And I know that both Poki and Val are breadwinners.

"Kasi tulala siya, I noticed before...It was announced to the staff and before kinausap ko sila, I told her myself. Kasi I felt that we have reached that certain level of friendship, na sa akin niya dapat marinig."

She added that Pokwang took it so badly that she was making ways to help herself move on with Kris out of the show next week, such as keeping scarce as early as now.

"Sabi ko, 'Ang weird, weird mo!' 'Tapos sabi ko sa kanya...kasi she and Mariel really really got close also and then she said na..." Kris did not finish this.

Aside from her co-hosts, Kris will miss the crew and the members of the staff of Pilipinas Win na Win!:

"Mami-miss ko din kasi, talaga, the staff treated me well. The staff who chose to stay there, they were really nice to me and they respected me.

Kris also revealed that her older sister Pinky Aquino-Abelleda, who was with her at the Belo press launch, told her that the qualities that helped make Kris successful in her career could be the very things that make her less successful as a wife.

"In-explain sa akin ni Pinky, everything daw that made me a success—that single-mindedness, the determination, doing the homework na pag-aaral—minimized me as a wife, because as a wife you need to be subservient," Kris said, quoting Pinky.

DEAL OR NO DEAL? With Pilipinas Win na Win! out of the picture for her, will she host the hit game show she once anchored, Deal or No Deal?

"It's being plugged. But, we are still discussing," Kris said.

But she admitted to not being too keen on the idea.

"Because I felt, uhm, that that I have done everything that I could do for the show. And the show was at its peak in 2007, when Noy ran for the Senate.

She added that if she's given a new show, she prefers one with a new format. Laughing, she put it this way, "Kasi I also know that all the time naman, I did great. That's why siguro, tumigas ang ulo about doing Deal or No Deal."

"And I feel I'm talented enough, I've paid my dues enough to have that.

"Because they have to give me something I am excited about. It's important to be excited!"

She added, however, that having a new show is not her priority at the moment. As she put it, "Honestly, before any other show, I think my personal life has to be put in order."

Kris explained, "Kasi if I look back at the entire year from August of 2009 to now, I haven't really had the chance to just reflect [on] the loss of my mother, the campaign of my brother, the demise of my marriage.

NEW HORROR MOVIE. Kris is set to do Dalaw, a movie with Star Cinema that will be one of the film outfit's three entries in the Metro Manila Film Festival.

"I start shooting October 11, and because it's a horror [movie], and there's a deadline for the festival, we calendared 36 days for the shooting," she said.

Her first two horror movies Feng-Shui and Sukob having been blockbusters, Kris said there is pressure for her third horror film to do well. The script has already undergone a number of revisions.

"Kasi, my two biggest [hits] is horror. This is a third. So, ang laki ng pressure that the script went, and I'm not exaggerating, through eleven revisions.

"So, tomorrow, may audition sila, and yung week, yung auditions with me, "Kris said.

This movie is why she is not affected by the things that happened to her, "Masuwerte lang ako kasi horror is my genre. If the script yesterday had been awful, and they told me we had to go through eight more revisions, I couldn't be smiling right now."

Coco Martin, who was originally part of the cast, is out. Kris and Diether Ocampo are still in.

"Si Diet, he is my husband. He is my evil husband. But, he's not really evil. Basta, surprise!" Kris excitedly said.