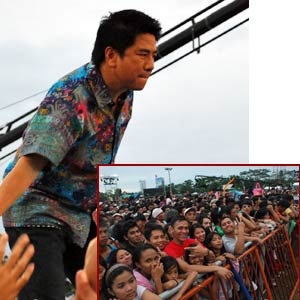 Willie Revillame experienced firsthand the warmth and enthusiasm of the Davaoeños (inset) during his Davao City visit last weekend to promote TV5's expansion in Mindanao.

While the country's summer capital, Baguio City, was playing host to the national men's football team's training camp over the weekend, Davao City's Agro Football Field was abuzz with a different kind of entertainment.

Willie Revillame's primetime game show Willing Willie loudly drummed up TV5's efforts to boost its presence not just in Davao but in the entire Mindanao—home to approximately 21, 582,540 residents, according to a 2007 data submitted by the National Statistics Office (NSO).

TV5 chief operating officer Bobby Barreiro told reporters in a press conference at the Marco Polo Hotel in Davao last Saturday, February 26, that the upgrading of the company's facilities in Davao is part of the network's vision of strengthening its presence on a nationwide scale.

"Everywhere in the country we'd like to do that. We're replacing all of our transmitters nationwide except for Metro Manila and we're applying for more frequencies. We'd like to even blanket the country with top-quality signals. That's what we're doing as far as reaching our target market nationwide.

"And then by May, we'll be launching our international channel. So everything is happening very quickly for us," said Mr. Barreiro.

CONVERGING OPERATIONS. Mr. Barreiro estimated that total management cost for the nationwide upgrade and renovation program will fetch "something like P5-billion in the next few years."

Davao will serve as TV5's main hub in Mindanao. The city hs been a bustling business, investment, and tourism center in the Southern Philippines for the longest time.

"Right now we're building the staff, we're getting all the equipment ready, the signals have been fixed and our next step would be to have more local programs," added Mr. Barreiro.

He continued, "We're building news bureaus in the whole of Mindanao and the nerve center is here in Davao.

"Kasi dati it's more on just replay, parang relay station lang siya, ngayon we want it to be an originating station—we wanted to have local content as well."

WILLIE IN DAVAO. The cloudy weather and occasional drizzle failed to dampen the spirit of the Davaoeños. In fact, they filled up the vast Agro Football Field to watch the live presentation of Willing Willie.

Although crowd volume was already sizable by the time the show started at 5:00 p.m., main host Willie Revillame wanted more. He urged the bystanders and those standing far from the audience area to come closer.

The controversial host fearlessly alighted a crane for the people to see him as he handpicked audience members to participate in the opening game.

Just as he did in Dagupan last December, Willie invited children and elderly women on stage to give them the chance to take home cash prizes. (CLICK HERE to read related article.)

The medical and security team tasked to oversee conditions of the audience in all directions got their hands full—tirelessly they assisted persons who were fainting left and right due to exhaustion.

Willie tapped the show's staff and security personnel to remove the little children away from the swelling crowd and have them occupy a comfortable space near the stage to eliminate the risk of accidents.

Willing Willie's production team members were also constantly on their toes as Willie frequently jumped off the stage to mingle with the crowd, selecting game contestants or simply handing out gift items.

Willie was feeling generous all throughout the program, repeatedly handing out additional money even to the losing contestants.

Willie had a hard time sneaking out of the venue after the show due to the traffic caused by the huge number of people leaving the football field. Nonetheless, he was overwhelmed by the warm reception he got from the Davaoeños.

Willing Willie's next stop will be in Cebu, which TV5 management is planning to stage next month in line with the network's regional launch, this time covering the Visayas island-provinces.