Suzi Entrata talks about her 15-year journey as host 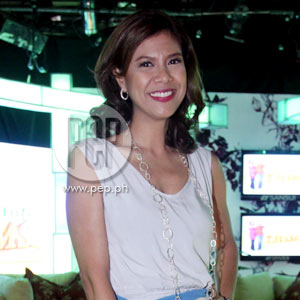 With Full Time Moms' new timeslot—5:00 p.m., starting February 28, 2011— Suzi Entrata hopes "to catch both markets now." She explains, "Those who go to office and live near their homes could catch the tail end of the show, while stay-at-homes can continue to tune in to us."

Suzi Entrata was all smiles about the recent changes in her talk show with Christine Jacob-Sandejas, Full Time Moms. Starting February 28, its new timeslot will be 5:00 p.m.

"It was really great!" Suzi exclaimed during her one-on-one interview with PEP (Philippine Entertainment Portal). "When we moved to the morning timeslot, the people who used to watch us in the evening—working people and office people—they couldn't catch our show anymore."

The strategy proved to be effective. "It was pretty good, our ratings moved a little higher," she affirmed.

Suzi says that Full Time Moms is perfect, being a mother herself (married to Paolo Abrera), and she even gets to hone her skills.

"Unang Hirit is great because it is a live show and talagang, I get to exercise my hosting skills because anything can happen, kailangan magaling kang sumalo, kasi if anything happens, it's live and you have to think quick."

She's also grateful because on Unang Hirit she gets to speak Taglish, unlike in Game Plan. She says, "It's more English, and in terms of language, the comfort of moving back and forth with the languages is really more a skill requirement."

She envisions a small show which, "when you ask help from us, complete yung help na mabibigay, it's not just for the show, not just for the episode, but a real public service sort of thing," she enthuses.

This type of show involves full commitment to ensure there are sponsors who will help in fulfilling whatever the show promises. "You have to immerse yourself and be empathetic doon sa mga tutulungan mo, and that's just a big dream of mine."

HER INSPIRATIONS. Suzi credits her skill as a host to starting out young and hosting programs in school. "Even then, it was something that came quite naturally to me, talking, projecting my voice. There was a genuine interest there, a natural ability to be able to express myself verbally."

She also looks up to “Tita” Che Che Lazaro, "who heads Probe Productions and Game Plan, which is the first show I did, a sports show. I would see her and be inspired by how articulate she was."

Even though the stand-uppers, those moments when the host looks at the camera and places the segment in context, were very different from Suzi’s way of doing it in a sports show (more active expressions), Suzi says what mattered was seeing "the confidence, the eloquence, that was there, I tried to emulate that."

She was also inspired by her former professor in Ateneo, Sev Sarmienta, a longtime sportscaster. She admired him for "his longevity, his teaching really broadens the skills of a host and at the same time, he is passing on his knowledge to us, the new generation. It's always a thrill when your teacher is somebody who is active in the profession."

With these strong academic influences on her hosting style, has Suzi ever considered joining academe herself? She laughs heartily and says, "You know, somebody actually asked me and I was so shocked! Before, everybody wanted to be a chef, the dream profession was to be a preschool teacher, and of course, I wanted to be that, because it is a way of entertaining and mass communication, teaching to younger people."

Because she started working in her fourth year of college, this teaching path was obviously not pursued anymore and she shares that when "somebody from the Ateneo did ask me to teach, I was very flattered because it's very different teaching college from teaching the little ones."

She admits to "not being an exemplary student nor on the dean's list" and to only having "high grades when there was a performance required, in Communication subjects or when there were presentations." Even then, Suzi knew her talent lay in entertaining and says that for now, she's not yet fit to teach college level. But for sure, when and if Suzi enters the academe, she'll definitely leave a lasting mark with her bubbling personality and abounding confidence.

So does a talented and seasoned host like Suzi still get nervous one may wonder? She shrieks and says, "there are times when I'm really nervous, depending on the guest, and it's odd when that happens, but it does happen when I'm talking to people like the Ayalas, senators, I get a little flustered."

Suzi remembers a complicated interview where she had to stand her ground throughout an interview, something that really stretched her where she thought for a moment, "ano na gagawin natin ngayon?" The interview involved someone who Suzi says, "tatanungin mo, di ka sasagutin ng diretso, paikot-ikot ang sagot niya, at sobra na akong frustrated kasi ang haba na nung conversation, and I really wouldn't let it go." Suzi persisted, and even though she said that at the end, "di pa rin nasagot ang aking tanong," she kept her cool.

Suzi is also challenged to keep calm and collected when the interviewee is talking about an emotionally painful topic like death and loss. She says, "I try very hard, and only when I finish the segment, doon lang ako pwede mag let go," meaning, that's when she can hug her guest and let go of the emotions she had to keep in because she's been, "pigil na pigil, throughout the interview, because I can only imagine the grief pero siya (the interviewee) had to go through it." She manages to joke and say that it would be strange if the guest was the one sharing the story and the host would be the first one to cry.