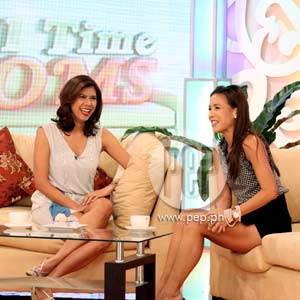 Yes, they can cook and do various things on air, but when when it comes to ironing, Christine isn't shy to admit it's not her strong suit. "Ang hirap [magplantsa] ng polo, e," she said.

Direk Bibeth posed this theory. Age gap. Both stars belong to the "folded and hung generation," while the director had to deal with washing the "pasador" in her time.

(Instead of a sanitary napkin, a pasador is a belted cloth women used to wear during their monthly period which had to be washed and ironed after each use.)

Direk Bibeth laughingly concluded that the younger hosts have the "mentality with wings."

Back to ironing. A guest gave tips and showed Suzi and Christine the proper way of ironing.

The two hosts followed instructions and tried to iron as best as they could but the finished product remained limp and wrinkled. However, they remained good sports, they kept their cool and just laughed about it.

STRONG POINT. A strong point of the show is its ability to showcase the value of a mother and what she stands for. She may not know how to iron a shirt, but she can, and will protect and fight for her family.

Christine explained, "My kids come first. Yung kinuwento ni Direk - my son got bitten by our dog — I actually left the taping [because] the kids, they always, always, always, come first, no matter what happens."

She added, "The show can always get somebody else but my kids cannot get another mom. That is where I draw the line."

The former Olympic swimmer with five kids told PEP, "Motherhood is the hardest and most fulfilling job; it is more fulfilling than my Olympic career and it's something I've always wanted to do."

She shared that, given a choice, "I would have married at 20. In my mind, growing up meant becoming a mom."

TOUGH JOB. Suzi, who has three kids, has been a mom for seven years now.

She shared, "Motherhood is the toughest job ever. So when moms say, ano lang ako, housewife lang kasi ako," she would tell them straight out, "'Te,' babaklain ko pa at sasabihin ko, 'Yan ang pinakamahirap na trabaho, yung the whole day you are responsible for your children.'"

"If you screw up your children, their lives will be screwed up forever, and it's your fault. Ang bigat ng responsibility, not just the mother but for the father as well," she said.

Suzi clarified that a full-time mom should not be confused with a stay-at-home mom, "because I think even if I am working, I'm still a full-time mom," she said.

The "work" as a mom never stops, "I'm constantly checking, how the kids are at home, what they had for lunch. We're lucky we have nannies to help us," she added.

The Unang Hirit host also stressed the importance of "letting the kids know I'm on top of things, that I'm the parent," especially since the hired help will not always be concerned about—for example—nutrition.

She told PEP, "I talk to them on the phone and let them know that even if I'm at work, I'm thinking of them."

Staying at home full-time is not an option right now, Suzi said, "If he [my husband] could provide for all of us at the level of living that we want, then definitely, I'm cool with staying at home. Sabi nga ng mommy ko, when you're at home, hindi ka mauubusan ng gagawin. My dream is to have everything organized in my home, with not a speck of dust."

HOW THEY DO IT. Both women juggle work and family. How do they do it?

Suzi said: "I learn as I go along, but when my husband is making tampo, I know I'm not doing a good job. He is my gauge, and when I feel there is tension between us, that means he misses me and I miss him, and there are certain things I have to sacrifice so I can spend more time with family."

Christine, on the other hand, said her mom is her inspiration when it comes to balancing commitments and family time. "I'm like my mom," she said. "I spend more time with my kids than I do with anybody else."

Another important thing for Christine is her faith. "I really prayed to have a family, to have kids, so once God gave me all of my kids, I said, I was going to take the best care of them; they're my little angels."

SINGLE PARENT HOUSEHOLDS. With more single-parent households, we asked Christine and Suzi what advice they had for moms or dads in these situations.

Christine said, it's definitely a challenge since the parent is doing it alone, but "you can always find somebody to help you—your mom, a sister, a brother. Always spend as much time as you can with your kids."

Suzi said, "Kudos to the single parent, I really don't know how you do it, because for example, at the end of the day, when you get frustrated and you think you're not doing a good job, you have your partner there to encourage you. Ang laking tulong noon. But with single parents, it's different."

She continued, "Always pray, find a support group, people you can trust, it's okay to ask for help, and give yourself a break."

BONDING. Both TV host-moms put bonding with their kids high on their list of priorities.

Suzi said: "We have movie nights with the kids. We ask them what they want to watch, or propose activities they can look forward to. Before they sleep at night, we count the days till movie night. The kids sleep in our room on weekends—that's really a treat for all of us."

Christine said: "They grow up so fast, before you know it, wala na. Sometimes you think, ay, maliit pa, they won't know na I'm not at home because they're so small. But they'll get used to you not being at home, and then it's so hard to catch up. They'll think, 'Mom's not at home, si yaya lang. I can do this by myself, I don't need to tell mom I had a fight at school because I never told her anything naman from the beginning.'"

What's the most important lesson they've taught their kids?

Christine became serious as she pondered the question. "There's this one time my son and I were making pasyal, and he goes, you know what mom, you really love us no? So for him to acknowledge that, to tell me that he knows that I love them, to me that says, I know I did my job."

Suzi recounted this lesson: "No subo from the yaya! Hay naku, I tell this to my kids all the time."

She said she wants the kids to eat on their own "to teach them independence, kasi di ba dito sa Philippines, laging may nag-aalaga, so gusto ko matuto sila on their own."

JOYFUL SACRIFICE. How do they keep stress away and keep things together?

Both Suzi and Christine said taking a break is important.

Christine said there really is no such thing as a happy home 24/7, but that she knows what to do to keep things together.

"I prayed for my husband. I prayed for all of my kids, because I didn't think I could have kids because I married late. When things get bad, I think, God makes no mistake. There is a reason why you're here, there's a reason why I'm here with you and I'm going to love you, no matter what and let's just try to make this work and get over the hump."

Suzi added that the key is to listen and to focus. "As a mom, you're always trying to do so many things at the same time. Ako, I can text without looking and sometimes I'm talking to my children pero yun pala, I'm texting. That's when I remind myself, if they are talking to me, pabayaan ko muna yung phone. That can wait, so it's really a conscious constant effort for me, that it's okay not to multi-task."

She concluded: "Moms should always practice 'joyful sacrifice' — it cannot be anything else. I tell that to my husband as well, because everything we do is really for them and even if we take something away, we do it because it's for them, it's lovingly done."