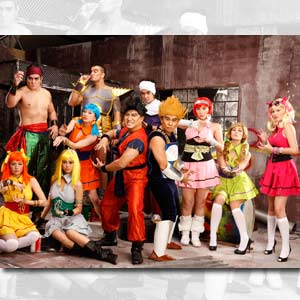 "Wala naman kaming problema sa ratings. Wala namang dapat kabahan," said Bubble Gang director Uro dela Cruz (not in photo) about a blind item that their show "will soon fade out after one decade and a half on the air."

The cast members of Bubble Gang were taping for their gag show last night, January 17, when they learned about a blind item concerning their show.

A report published in a national broadsheet yesterday claimed that a show "will soon fade out after one decade and a half on the air."

The show was described as "one of the most innovative, most creative and most imaginative fun shows on local television," which prompted the writer to say that he will "shed a tear when the show finally bursts like a bubble."

The clues of the item seem to be referring to GMA-7's gag show, Bubble Gang, which celebrated its 15th anniversary in October 2010.

Direk Uro is puzzled about this blind item since watching Bubble Gang has become a habit among viewers, he said. "We don't want to change that timeslot kasi magagalit ang mga tao."

"Bubble Gang is synonymous with the network. It's something that has a very loyal following both in the trade and sa viewership niya. And again to a large extent, we acknowledge that particularly sa timeslot niya, napaka-late na... Bubble Gang will outlive me, so will Bitoy [Michael V] and Ogie [Alcasid].

OFFICIAL STATEMENT FROM GMA-7. The Kapuso Network, through its Senior Vice President for Entertainment TV, Wilma Galvante, also emailed to PEP this statement to put an end to the rumor.

"The Kapuso Network finds no reason to end Bubble Gang, one of its flagship programs, as it goes stronger and continues to deliver its unmatched brand of comedy to its loyal viewers every week as it did for the last 15 years. In fact, it has been airing at an earlier time slot to cater to even more viewers since November 2010."