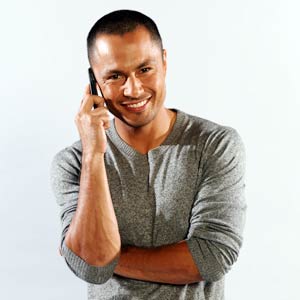 Without a doubt, Derek Ramsay is one of the most visible stars these days—on billboards, on the boob tube, on the Net, and even in radio and print.

He is a swoon-worthy subject for the ladies. But despite the fact that he's usually seen shirtless, he has built up a wholesome image for himself.

Sports, of course, have helped. But the Filipino-British actor has another secret.

"I keep mum when it comes to controversies, the nice-type, you know. But I would always say what's on my mind, but in a non-offensive way," he says.

The most recent controversy that surrounded him was about his love life.

A source of PEP (Philippine Entertainment Portal) has remained firm in saying that he and his girlfriend of four years, Angelica Panganiban, have called it quits.

Derek denied the allegation via a text message he sent to a contributor. (CLICK HERE to read story)

But in his television interview, his reaction was: "I like what PEP wrote. I just read page two now! Very professional!"

Does this kind of controversy affect him? He's perceived to be serious, deep, and mysterious—is that how he is in real life?

"That makes me all the more human," he replies with a laugh. "Kidding aside, I have a good sense of humor. I don't take myself too seriously."

RECENT PROJECT. He recently inked a deal with red Mobile, a telecommunications company. He thought of it as a very economical venture because of its "crazy low rates"—which is four pesos for unlimited text to the same network and eight pesos unlimited calls and text—that keep him "connected with my friends and loved ones, all the time!"

His humor, he says, makes him a good complement to the brand he's endorsing.

What makes him an ad magnet?

Candidly he answered, "I think I am very professional and easy to work with. I know I am always sincere, and sincerity is a very big advantage in advertising."