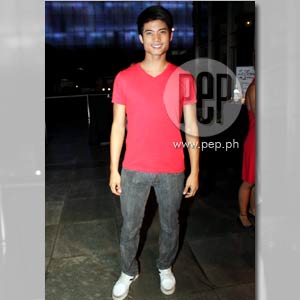 "Napre-pressure with myself to be the best actor that I can be. I try to prepare myself as much as possible with workshops. Hindi ko iniisip yung iba kasi I can't compare myself to them kasi ako baguhan lang ako and this is my experience. So I have to do it my way. Like I have to prepare myself my way, I can't say na gagayahin ko siya kasi nasa kanya na 'yon," newbie Mikael Daez says about improving his acting skills.

Dressed casually in a red shirt, jeans, and a pair of sneakers, the tall good-looker discreetly entered the venue of the recent La Femme Awards. He found an empty table and helped himself to a cocktail.

He stood there for a minute enjoying his drink all by his lonesome. PEP (Philippine Entertainment Portal) then approached him to ask for his photo by the event wall.

He flashed a look of surprise and gestured that he didn't want to pose. Celebrities would normally and comfortably pose in front of the cameras. But he just smiled and said politely, "Later na lang po siguro, with some of my friends."

PEP then asked if we could just interview him instead. Surprised again, he said reluctantly, "Uhm, sige po."

WARMING UP. Those awkward moments, however, turned into a free-flowing conversation when we asked him about the upcoming GMA-7 epicserye Amaya in which he stars with Marian Rivera and Sid Lucero.

A few months in the industry and Mikael says he is still learning the ropes. But he stressed that he doesn't make a big fuss about the sudden popularity brought about his new job.

"Well, hindi ko naman pinapansin. Kasi people would say, 'Hi,' I say, 'Hi,' too, they want a picture, okay lang. I mean, it doesn't really make much of a difference. I just go about my work and do whatever I want to do," he said.

He admits that being chosen as one of Marian Rivera's leading men in the epicserye surprised him a lot.

He continued, "Malamang, I think anybody would naman, e. At first I wouldn't believe it. Hindi ako makapaniwala. I was like, 'Seryoso ba 'yan? Partner ko ba talaga siya?' I finally believed it when we met na, I'm like, 'Totoo nga ito!'"

After a few weeks on the job, Mikael learned a lot.

"I'm enjoying. I am learning so much. I love that the GMA is so supportive and all the other actors and actresses. They'll tell me do this, do that, and siyempre nakikinig lang ako. Beterano 'tong mga ito. Baguhan lang ako. I just try to absorb as much as I can," he told PEP.

READY FOR INTRIGUES. Coming from the world of modeling, Michael is no stranger to intrigues.

"Wherever you go naman, even in modeling laging may negative comments. It's in the system. Pero I think what is important is how you take it," he asserts.

He relates his first-hand experience of criticism in the industry where he came from.

"Siyempre in acting in my first scene, [I expect to hear] 'Uy! Bakit ganun siya mag-acting. Pero the thing is, it happens talaga. I'm sure even the veterans, the old people they get criticisms. So take it in and try to learn na lang. Kasi wala, that is the only way you can do naman and just take it as something that can make you better na lang," the 23-year-old newbie said.

PROFESSIONALISM. Mikael was a graduate of Business Management in Ateneo de Manila University when he first dipped his toes into modeling. He accepted a modeling job the summer right after college.

Eventually, he enjoyed the work and did some fashion shows and commercials.

"So I never really had a job that is connected to my course," he said.

However, he acknowledged the values he learned in college and in modeling.

"One thing I learned, kasi Business Management ako, is professionalism. Kung work mode, walang kaguluhan dun. Parang, sige magtsikahan kayo with your co-actors, the productions crew, the staff basta with the aim to create a product that is good.

He added that it is even more intense with Amaya because they have tapings four times a week, and the location is in Bolinao, Pangasinan, which is a five-hour drive from Metro Manila.

No matter how hard things are for Mikael, he draws inspiration from his co-actors Marian Rivera and Sid Lucero.

DOING IT HIS WAY. Mikael expressed admiration for his co-actor, award-winning Sid Lucero. "I feel so privileged to be working with him. Nagkakasama na kami and it so interesting watching them kasi watching them pa lang natututo na ako, kung paano sila gumalaw, their acting methods, their techniques. From there palang, I see them as inspirations.

Filling the big shoes of Marian's beau Dingdong Dantes was never an issue for Mikael. He doesn't feel pressured by anyone but himself.

"Napre-pressure with myself to be the best actor that I can be. I try to prepare myself as much as possible with workshops. Hindi ko iniisip yung iba kasi I can't compare myself to them kasi ako baguhan lang ako and this is my experience.

"So I have to do it my way. Like I have to prepare myself my way, I can't say na gagayahin ko siya kasi nasa kanya na 'yon," he explained.

MEETING MARIAN RIVERA. Before actually meeting Marian, Mikael revealed that he heard a lot about her "temper" and "attitude."

"Nung nakilala ko siya, not at all!" Mikael exclaimed.

He went on to explain why he thinks people might misconstrue her personality.

He also revealed a few other things he learned about Marian in the short time he interacted with her.

Gesturing freely, he added, "Alam niya lahat ng mga corny jokes as in alam niya lahat! That is one thing, I didn't expect that.

But of all of his discoveries, Marian's craft left him in awe.

STATUS: SINGLE. As for his lovelife, Mikael said it would be put on hold for now.

"I am single and I can stay that way for a while because of work," he said.

Mikael hasn't been in a relationship since he graduated from college last year.

He doesn't have a specific preference on whether his next girl would be from showbiz or not.

"Ako, I don't know. Whatever comes my way na lang. Right now kasi I am super focused on work," he stressed.

As for the qualities he looks for in a girl, Mikael singles out the ability to converse well.

Good looks also matter for Mikael but he still underscored the importance of conversation for a lasting relationship.