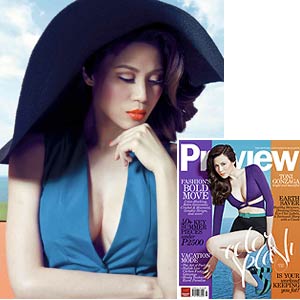 Toni Gonzaga shows off her svelte figure in the April issue of Preview magazine.

It's hard to believe that after four years of being together, Toni Gonzaga has never been able to travel alone with her boyfriend, director Paul Soriano.

But she isn't bothered, as she tells Preview magazine this April, "People say I might be missing half my life, but I think people respect me more because of the way parents brought me up so I don't regret anything."

Toni is proof that listening to your parents pays off. After all, it was listening to their advice that brought her to where she is today.

"I [used to] join any singing contest I heard about on TV. Then I realized that [the hosts of] noontime shows don't just sing; they have to do other things as well," she says, "My dad advised me to try everything, which I did—acting, modeling, even going to VTRs for commercials. My mindset was... I should be able to do everything, so I don't get pegged into [doing] just one thing."

Today, Toni is known for being a multi-talented artist: she is an actress, a host, and a singer, all rolled into one.

"I enjoy what I'm doing because when I have work, when I'm busy, I feel alive." She adds "model" to her roster of roles this April as she shows off her svelte figure on the cover of Preview for the first time.

The cover feature has Toni donning the brightest hues of the season, a far cry from her usual fashion sense which she describes as "relaxed, laid-back, comfortable." Toni says, "I'm not fashionable at all. I go for the basics, the classics, what looks good on me."

See more of Toni Gonzaga by grabbing a copy of the April issue of Preview, available in newsstands, bookstores and supermarkets nationwide. For your daily dose of fashion, visit StyleBible.ph. You can also become a fan of Preview on Facebook via Facebook.com/preview.ph and follow us on Twitter via Twitter.com/previewmag.