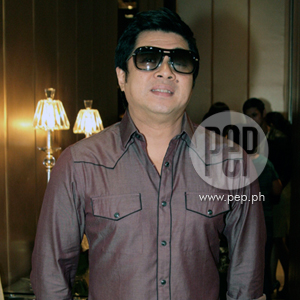 Randy Santiago on his role at the wedding of co-host John Estrada (not in photo): "Cord daw ako. So yun, ako taga-tali sa kanila."

It has been a week since the launch of Happy, Yipee, Yehey!—the noontime show of ABS-CBN, casting Randy Santiago and John Estrada as main hosts.

The network's latest offering elicited various feedback from the public. Some found the show promising, a few were skeptical.

First, he reacted to comments saying the Randy-John tandem is incomplete without Willie Revillame, who became their co-host in Magandang Tanghali Bayan, which aired for seven years—in various incarnations, such as Masayang Tanghali Bayan and MTB Ang Saya Saya—from November 30, 1998 to February 4, 2005.

"But of course, we'll have to move on dahil for five years, si Willie naman mag-isa. Sasabihin ng tao, masarap din na kasama kaming dalawa (Randy and John), pero na-prove niya na he can do it by himself," Randy said.

And that's one thing he is asking the viewers—to give them a chance.

The idea was revived because their segment was a favorite among viewers. "Yung naughtiness namin ni John, yun yung nami-miss ng mga tao," he said.

ON THE BRIGHT SIDE. He refused to let the not-so-favorable reviews dampen his spirits and chose to focus on the fans.

JOHN'S WEDDING. Meanwhile, John and bride-to-be Priscilla Meirelles are all set to take their wedding vows on February 26. Randy is the cord bearer.

Any advice for John?

He did have a message for John. Borrowing a line from a song popularized by Hajji Alejandro "Panakip Butas," Randy sang, "Boy, ikakasal ka nga ba..." and started laughing.

RAYMART'S MARRIAGE. Randy was caught off guard when The Buzz crew asked him about his youngest brother, Raymart, who is rumored to be having problems with wife Claudine Barretto.

The reporters asked him again if Raymart and Claudine are still together, and he replied, "I'm very sure."

Lastly, he returned to the issue at hand. His promise to the viewers: "Marami pa kaming gagawin para sa kanila... We're doing our best to make them happy, go yippee, and say yehey."